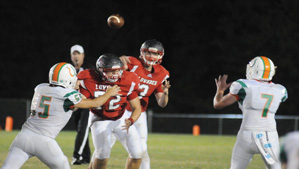 For the first half, the battle between Lowndes Academy and neighboring Hooper Academy was close, but a strong second half propelled the Rebels to a 42-19 win.

Tied 7-7 with 5:34 left in the first half, LA’s Chase Robitaille picked off a Hooper pass and ran it back to the Rebels’ 34. On the next play, Trevor Haney broke free for more than 40 yards, setting the Rebels up deep in Colts’ territory. Two plays later, Rebels’ quarterback Colby Briggs plunged in to make it 15-7 after the two-point conversion.

Hooper came roaring back and scored right before the half to make it 15-13.

After a back and forth third quarter, Lowndes Academy punched it in from 5 yards out on a run by Daniel Janes. Rostick Smith’s kick was good and the Rebels held a 22-13 lead with 4:56 left in the third quarter.

Haney then scored on a 14-yard scamper with 1:08 left in the third and Smith’s kick was blocked, leaving the Rebels with a 28-13 lead. Before the quarter ended, the Colts scored on a long run to make it 28-19.

The Rebels then rallied behind the running of Haney and Janes as on the first play of the fourth quarter Janes scored on a short run and Smith’s kick split the uprights to make it 35-19.

Lowndes Academy got one more score from Haney who took it in from a yard out to make it 42-19 after Smith’s kick.

The Lowndes Academy defensive unit stepped it up in the second half and effectively shut the Colts down. With 3:05 left in the game, Thomas Franklin recorded a big sack.

“This is an old school rivalry,” Lowndes Academy head coach Shane Moye said “It was just a battle early on. We did some things that really hurt us and they came out and played hard. Hooper is a tough football team. When you play a rival, you never know what is going to happen. In the second half, we made a few adjustments and came out and really played well. The offensive line came out in the second half and really said ‘we’re going to run the football.”

The second half resurgence impressed Moye.

“Daniel Janes and Trevor Haney stepped up,” he said. “The turning point was when Landon Hooper made a big tip and the Robataille interception were turning points in the game.”

The defense shut down Hooper’s offense when it needed to, according to Moye.

“The offense was struggling a little and the defense kept us close until we pulled away.”

This week the Rebels get Friday night off as the team that was on the schedule, Coosa Valley, no longer fields a football team.

“We’re kind of beat up so it comes at a good time,” Moye said. “We’re going to get healthy and work on us and get back to fundamentals. We need to get right for that tough stretch going into the send of season with Macon, South Choctaw, Clarke Prep and Escambia. It’s about to get real tough for us. Hopefully we’ll do a better job than we did last year.”