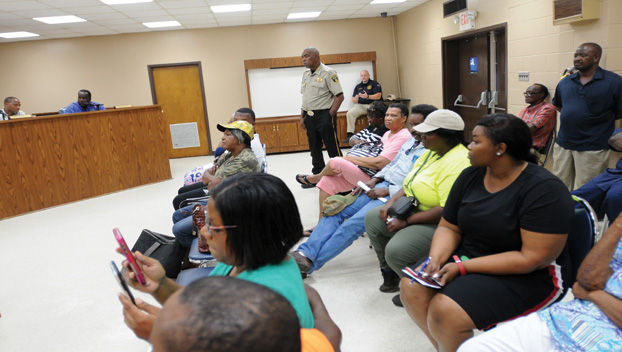 The Lowndes County Commission passed its annual budget Monday night amidst turmoil as several members of the Commission disagreed over raise amounts.

More than two dozen county employees packed the Commission Boardroom and listened as County Administrator Jacquelyn Thomas gave a synopsis of the budget for the coming fiscal year, before the budget passed with a 3-2 margin.

However, the real issue the crowd was there for was to see the type of raises given to county employees. At a previous meeting, a 5 percent raise with bonuses was proposed and two commissioners, Robert Harris and Joshua Simmons, wanted to see employees get a flat rate of $1 per hour to help lower wage employees.

The budget proposal came in with the 5 percent proposals.

“It’s not against the law to give a $1 raise, but what raises often take into consideration is the job description, how long you’ve been there, how much responsibility you have — they all vary,” Sanders said. “That’s why you nearly always see raises as a percentage. It isn’t always a percentage.”

Harris, as the Commission continued discussions, raised the issue again.

“Does the Board realize why all these people all of these people are here?” he asked. “They are here about a $1 increase. The 5 percent increase means more for the highest paid employees. At $10 per hour, that’s $20,880 per year, for them, 5 percent is $1,040. They need to be able to make it as well. If we gave them $1 per hour it would take their salaries up $2,080. That increase would put them just above the poverty level. That’s the reason these people are here.  We have more than enough in the budget to handle a $1 per hour raise.”

Harris also said the Commission should consider giving up many of its appropriations to allow for raises.

Commission Chairman Carnell McAlpine said nearly all governmental agencies use a percentage-based raise system. McAlpine said it creates a disparity system, which Sanders said could cause other problems for Lowndes County.

As discussions continued, Harris said he felt employees should be taken care of first before other expenditures.

“They’re here because they want to take care of their families,” he said. “We’re supposed to be good stewards of the county’s money.”

The discussions continued for more than 30 minutes before Commissioner Dickson Farrior put a motion on the table offering the one-time, $1,000 bonus and 5 percent raise. Commissioner Joseph Bargainer seconded it   As the roll was called, McAlpine, Bargainer and Farrior voted for it and Harris and Simmons voted against it.

The meeting adjourned quickly and Sheriff “Big John” Williams and Chief Deputy Marcus Green stood by, but there were no problems or incidents.