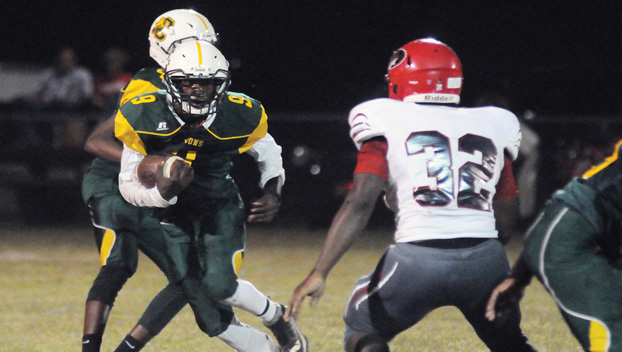 It was a tough night on the field last Friday for Central’s Lions as the team lost 53-0 to highly ranked Luverne, but coach Michael Perry Jr. said there were positives despite the defeat.

After winning the coin toss and electing to defer to the second half, the Lions kicked off to Luverne, which methodically drove down and scored with 7:42 left in the first quarter. The series had a defensive highlight for the Lions as Eric Maul got past the Luverne line and blocked the extra point.

“Luverne is good team and they were geared up to take away what we like to do offensively,” Perry said. “They were able to limit us to under 100 yards for the entire football game.”

Perry said the defense fought hard early but was hurt by several penalties.

“Our junior defensive end Quninderrious Rush and eighth-grade middle linebacker Ben White Jr. led us defensively with White having eight solo tackles, two assists and a tackle for a loss and Rush with seven solo tackles, a sack and three tackles for a loss.”

The Lions learned form the loss, according to Perry.

“This was a good game for the guys to experience a program that has a winning tradition such as Luverne so we can mimic some of their winning characteristics and execution and build our program,” he said. “The biggest plus was coming away from this game injury free and also seeing what has to be corrected — especially after our offensive line play. We so far have played three of the top teams in the area, which I consider to be some of the best in 2A. It feels like we just played Auburn, LSU and Alabama all back-to-back.  Considering this, we played all three from start to finish, which is a big improvement from last year.”

The schedule for the Lions doesn’t’ get any easier from here, according to Perry.

“The team morale is still high and everyone has come out this week working to get better,” Perry said. “Now it is back to the basics with sharpening up our fundamentals and techniques to get better week in and week out. This week will face 4A Monroe County high School, which has a lot of athletes that we will have to account for. The message this week is simple: Monroe County is the most important game of the year because it is the next game on the schedule. We need to worry about no one but Central High School and cleaning up our execution. Come out and support us on Friday night vs. Monroe County high School.”