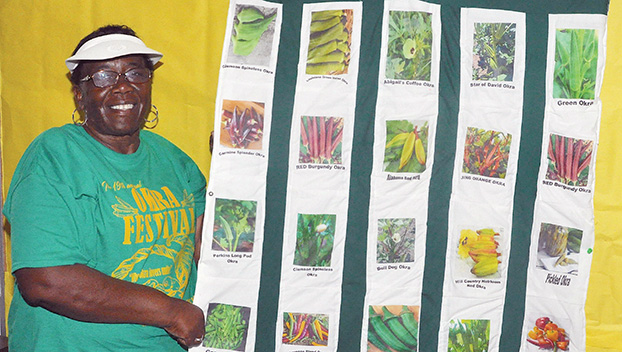 Julie Coleman of Montgomery, but originally from Burkville, home of the annual Okra Festival, shows off her prize okra quilt. | File Photo

It’s that time of year when “the people’s vegetable” is celebrated in Lowndes County.

The annual Okra Festival is set for Aug. 31 at 4560 AL-21 South in Burkville and features free admission.

John Williams (not to be confused with Sheriff “Big” John Williams) of the Okra Festival said the event runs from 10 a.m. until 5 p.m.

“It’s a family-friendly event with entertainment, live music, arts and crafts, face painting, a bouncy house, fresh vegetables, hot food, and all of the wonderful goodness of Okra,” he said.

As the event is called the Okra Festival, Williams said, there would be pickled okra, fresh okra, breaded okra, “all kinds of ways okra can be made and recipes for the public.”

Williams said, “We hope we have a great turnout, the weather is great and just a nice family outing for everybody.”

The Okra Festival is a free event. But vendors will be selling their products and food.

Williams said preparing for the event has been a challenge and that he is getting calls from vendors. However, he said, “This will be a great family outing. And we want everybody to come out (from Lowndes and surround counties and towns) and support it. Come by and see what’s available.”

In 2017 the Okra Festival drew more than 900 visitors and in 2018 Williams said crowd estimates were about 800. The event also features an art contest for children 13 and under.

“Vendors come from all over and so do the people,” he said. “This is our third year at the new location and hopefully it will be bigger than ever. “

REACH (Rural Enrichment Assessing Community Hands) hosts the event and is a non-profit organization that has been in existence for 20 plus years. Its mission, he said, is “To administer quality educational, cultural, recreational, civic and social programs and to engage in activities that will provide for the enrichment for the Lowndes County Community.”

Williams said he always looks forward to the variety of recipes he’s seen at the Okra Festival.

“One year somebody had an okra pie,” he said. “I had never seen that. Hopefully someone will ring an okra pie. We’ve seen baked okra too. A lot of people have been calling about it so we hope to have a good crowd and great group of vendors.”