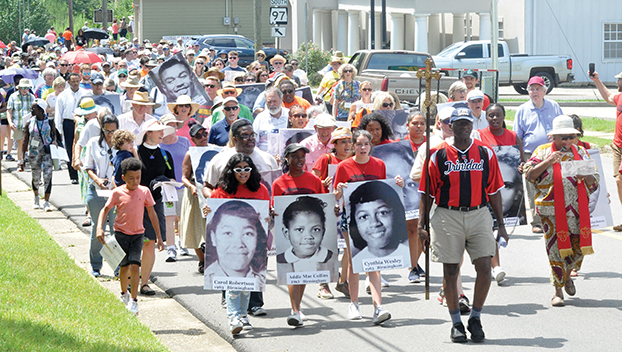 Last Saturday, the 23rd anniversary of the Pilgrimage and Procession for the Feast of Jonathan Myrick Daniels, Martyr of Hayneville, drew hundreds of visitors from dozens of states. Daniels, born in Keene, N.H., was shot and killed on Aug. 20, 1965 by an unemployed highway worked that had been “deputized,” as he tried to protect 16-year-old Ruby Sales.

Each year, the Pilgrimage has grown and it makes its way through the streets of Hayneville.

The day kicked off with the Lowndes County School District serving breakfast to students that came from other states. At 11 a.m., the crowd, which numbered several hundred and made its way from the Lowndes County Courthouse Square to the old Lowndes County Jail and then to the site of the former Varner’s Cash Store on AL-97. Vocalist D’Marie (Dollie Howell Pankey) helped lead the way and led several songs at each location. From the former Varner’s Cash Store site, the procession made its way back to Courthouse Square and Daniels’ monument.

At the monument, a former Virginia Military Academy student, of which Daniels was a graduate, spoke about the life Daniels led. Gene Williams spoke to the crowd before it made its way to the courthouse for the service.

“I wanted to say how proud I am to see all of you here,” he said. “I am so proud of my college and people who had the courage to attend a place like that, and even more than that, I’m so proud of the people who partnered to erect this monument for Jonathan Daniels. He did the greatest work trying to help in the Civil Rights Movement. Young people, years before the Institute, took up to represent the great cause that Jonathan did. I’m so thankful that all of you are here to honor the work that Jonathan and people like him and all of the other martyrs who gave their lives for justice and freedom.”

Once in the courtroom, a very solemn ceremony took place with Kenyen Brown, former Unites States Attorney for the Southern District of Alabama, delivering the Homily.

“I’m so honored to have this opportunity to speak,” Brown said. “It’s good to come together and honor those who came before us and made sacrifices.  We should honor those who came before us like Jonathan Daniels who made the ultimate sacrifice of his life here in Hayneville those many years ago. Jonathan Daniels heard the call of justice. He heard the clarion call issued from the lips of Dr. Martin Luther King Jr. to all people of good conscience to come to the South. To come to this area to help people register to vote and to obtain their Civil Rights.”

Brown said the story of Daniels and those who came to Lowndes County is a powerful one.

“On Aug. 14, 1965, Daniels was protesting whites only stores in Fort Deposit,” Brown said. “They had been out there for a long time in the August heat and they were arrested. They were transported to the jail that we just came from in a garbage truck. They were in jail, some not as long as Daniels, for six days in August with no air conditioning in a cell. He and his companions sat there in jail. They were ultimately released. Being in the sweltering heat of Alabama in August, they walked around to the store that we just stopped at to get some cold sodas. As they did, a deputized racist came out and started to harass them. Ultimately, this deputized racist took a shotgun and raised it against Daniels and his companions and fired. Daniels, sensing the danger, standing in front of a 17-year-old black girl, and took the full blast of the shotgun, being killed instantly.”

Brown said that when Dr. Martin Luther King Jr. heard about Daniels’ death, he spoke about it.

“He said that ‘one of the most heroic Christian deeds of which I’ve heard in my entire ministry, was performed by Jonathan Daniels,’” Brown said. “Daniels’ killer was charged with manslaughter, not murder. He claimed self defense, even though those he confronted were not armed. Ultimately his murdered was acquitted by an all white jury in this courthouse in Lowndes County. Injustice pervaded that proceeding. The bible says that no one has greater love than this — to lay down his life for his friends. Daniels is just one of the many who laid down his life for the Civil Rights struggle. We owe a tremendous debt to him and those who came before us — both black and white — who determined that quality was better than their current company. Civil Rights is not a black or white issue, it’s not a red or blue issue. Civil Rights is deeply rooted as an American issue and in many instances a moral issue. It’s an issue rooted in our constitution. It is what is just and right.”

The Rev. Fannie L. Davis serves as the Lowndes County coordinator for the annual pilgrimage. She makes her home in Burkville and is associate pastor at Ebenezer AME Zion Church in Montgomery. She also serves on the Episcopal Diocese of Alabama Commission on Race Relations.

When asked what she thought about the breakfast hosted by the Lowndes County Board of Education this year, Davis said, “I think it was just wonderful. I think what the Board of Education does in hosting the young people and especially the opportunities they have to ask questions and hear the answers is very significant for our country right now.”