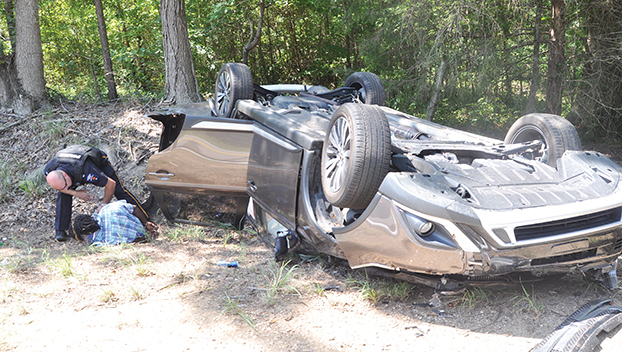 A Montgomery man was jailed last week after he led Greenville police officers on a pursuit through two counties that ended in a crash in Lowndes County.

Greenville Police Department Chief Justin Lovvorn said that officers received a called around 10:45 a.m. from a local business stating that an employee had observed an individual taking items from the store without paying for them. The store employee was able to observe what vehicle the suspect got into and gave the description as he was leaving the parking lot.

“One of the responding officers observed a vehicle matching the description on Fort Dale Road near Cahaba Road,” Lovvorn said. “He attempted to get behind it. That is when the vehicle accelerated to a high rate of speed and cut off other vehicles as it turned on I-65 and headed north.”

Officers continued the pursuit at high speeds northbound on Interstate 65 and it exited the interstate at Exit 142 in Fort Deposit and proceeded southbound on AL-185 and a high rate of speed for a short distance.

At the scene, officers from Greenville and the Butler County Sheriff’s Office checked Clayton for injuries, took him into custody and directed traffic while an ambulance from GEMS was called. The accident occurred on a straightaway just past Lowndes County Road 79. The suspect was heard at the scene complaining “it hurt all over.”

Clayton was transported to Regional Medical Center of Central Alabama in Greenville where he was treated and released; suffering only minor scrapes and bruises.

As crews from F&S Towing in Greenville prepared to remove the vehicle from the ditch where it had overturned, officers recovered stolen merchandise and bagged it as evidence.

“Officers found that the suspect (Clayton) had also given a false name when they had attempted to gain his information,” Lovvorn said. “The suspect was then transported to the Greenville Police Department where he was interviewed by investigators and they were able to determine his true identity.”

When Clayton’s identity was confirmed, it was discovered that he was on probation and also had outstanding warrants from the Lee County Sheriff’s Department and Alabaster Police Department. Clayton was found to have stolen just under $600 worth of electronics and other merchandise from the Greenville store where the call originated. All of the stolen merchandise was recovered by the GPD. Clayton remains jailed with a hold placed on him from other jurisdictions for the outstanding warrants.

“I would like to commend our officers for their actions today,” Lovvorn concluded. “They were able to respond in a timely and effective manner in order to identify and confront the suspect before he could leave the area. It is because of their efforts that a repeat offender who continued to pose a serious risk to the public is now in custody with no loss of life or serious injury to the suspect or innocent bystanders. We would like to remind everyone, if you see a crime, make sure your report it. Our officers are always working hard to protect and serve you.”