Favorable school system accreditation news, grant recipients, award winners, personnel decisions and a host of other announcements highlighted the Thursday, Dec. 13 meeting of the Lowndes County Board of Education.

Lowndes County School Superintendent Jason Burroughs announced at the December meeting of the board that the school system “is” recommended for accreditation.

Burroughs said, “The report indicates that Lowndes County School System is recommended for accreditation.” And he said the next scheduled meeting of the AdvancED Global Commission is Jan. 28-29 at which approval is granted.

“It’s a great thing to have an accredited school system,” Burroughs said.  “It means that our school system meets a minimum set of standards set for all schools in the region.” He also said, “One of the things a family looks at when it moves to a region is if the school system is accredited.” He said that accreditation could help attract families to move into the region.

It was announced that grant funds in the amount of $12,500 were awarded for the Alabama Digital Tools for Teachers Initiative to purchase five technology packages known as “Teacher Backpacks” for Lowndes County teachers.

The backpacks support literacy and/or STEM programs including a minimum of a laptop, a wireless tablet, a projector and professional development.

The proposal was written by Lowndes County Board of Education Director of Technology Dr. Benitha Mathews.

Burroughs further announced grant awards of  $489,081 under the 2018 Distance Learning and Telemedicine Grant Program administered by the Rural Utilities Service in which collaboration with Dallas and Perry County Schools, which he said “will provide high-quality distance education” and which “will expand dual enrollment classes and provide additional applied science and technology classes at our high schools”  and which “will significantly increase professional development offerings for our teachers and administrators.”

He announced a grant of $500 from the Central Alabama Electric Cooperative will be used to address the needs of autistic students.

Latasha Bruce was recognized for getting a Golden Apple Award.

Burroughs announced that the district-level Scripps Spelling Bee will be held on Tuesday, Jan. 29 in the Lowndes County Middle School Theater in Fort Deposit beginning at 6 p.m.

He said, “The winner of the district competition will represent Lowndes County Public Schools at the state competition on Saturday, March 19 at the Westwood Baptist Church in Alabaster.”

He said, “This academic competition is open to all students enrolled in grades 6-12. Students who win at the district level will have an opportunity to compete in the Greater East Alabama Regional Science and Engineering Fair (GEARSEF) to be held at Auburn University on March 6 and 7.

Burroughs reported that on Nov. 29 the school system’s Federal Programs Department hosted a Parental and Family Engagement Night Program in the cafeteria of Central Elementary School.

Burroughs said Dr. Jackie Stennis with Gear Up Alabama was the guest speaker who spoke on how parents can keep their children engaged with different cost-efficient activities over the holiday break.

He said, “Parents were able to play different board and card games with their children.” And he said, “All of the games, even though they were fun in nature, were also educational.”

He said it appears at leak in the roof of the Central High School gym has been repaired by the contractor. However, he said, bid opening for a Head Start Central Office has been delayed until 2 p.m. on Jan. 10.

Burroughs said the first renovation of the Lowndes Public Schools Central Office is underway since the building was constructed in 2001. He said painting has been completed and flooring is expected to be completed during the Christmas holiday break.

He said the 2019-2020 school calendar will be up for approval at the next scheduled meeting of the school board.

And the following action items were unanimously approved board:

The last item was in reference to AMSTI’s reimbursement of Lowndes County Public Schools for substitutes required for teachers participating in AMSTI training.

The next meeting will be held at 7 p.m., Thursday, Jan. 10 at Lowndes County Middle School in Fort Deposit. 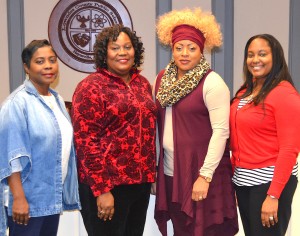 Lowndes teachers get digital tools grants
Grant funds in the amount of $12,500 were recently awarded for the Alabama Digital Tools for Teachers Initiative to purchase five technology packages known as “Teacher Backpacks” for Lowndes County teachers from left, Angelica Roberson and Floretta Timmons, both of Central Elementary and Ora Gordon and Latasha Bruce, both of Jackson-Steele Elementary. Not pictured is Lillie Davison of Central Elementary. Submitted.