Those were the words of Lowndes County Commission Dickson Farrior following VIP Night at the new Acre Hardware in Hayneville on Monday, Nov. 26.

The new business, which actually held a soft opening Tuesday, Nov. 27, is located at the former site of the controversial Hayneville Plaza.

Joe Bell Jr. and his brother Travis Bell, own the new Ace Hardware. And they are sons of Leola and Joe Bell Sr.

“We are excited, and we humbled by the tremendous honor it is to serve the community we call home,” Joe Bell Jr. said. He said an official grand opening for the business will probably be held in the early spring.

Bell said VIP night was held “to say thanks to the people who helped us to get here.”

He said the new business has about 10,000 square feet of retail space with about nine different departments from lawn and garden, to hardware and plumbing to building materials.

He said he and his brother, Travis, would like to cater the store to the demands of the community. And he said the store will carry appliances in some way if that is demanded by the community.

Bell said the store is starting off with a team of four employees but will likely expand at a later date.

As to the cost, Bell would only say there has been a big investment in the business, but, “It’s been our passion project.”

He told those who attended VIP Night that he first stood in front of the Lowndes County Commission about three years ago. And, he said, “We would not have been here without the help of the county commission.”

Bell said further, he appreciates the words of encouragement from the community because “It’s not easy to do something new in a small community.” And he said, “We ask that the support continue from this point on. This is just the beginning for us.”

Joe Bell Sr. said, “Our goal is to provide the best service at the best price with the friendliest help we could hire.”

Travis Bell thanked the entire internal team of Ace and his brother Joe.

Among those on hand Monday night were Jim Byard Jr., director of the Lowndes County Economic Development Commission (LCEDC), and Tucson Roberts, who works with retail businesses for the LCEDC.

Roberts said the new Ace Hardware will generate local sales tax revenue and is an entrepreneurship with people from Hayneville who are investing in Hayneville. He called that “the best part of it.”

Joe Bell Jr. and his brother purchased the Hayneville Plaza from the Lowndes County Commission for $125,000.
The commission floated a $3.5 million bond issue to purchase the building from Karl Bell for $3.2 million for use by the South Central Alabama Broadband Commission (SCABC) in connection with a federal grant and privately funded broadband project. The grant for that project was later terminated.
Bell Ventures claimed the Hayneville Plaza building was not built to code and it had been determined by numerous experts to be dangerous to occupy. 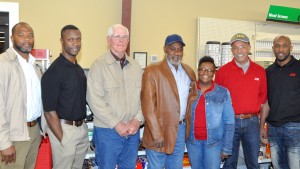