The program is sponsored by the Lowndes County Juvenile Court and is a partnership with the Lowndes County Board of Education. It recognizes youths under 18 years of age who, “by their own actions, make a positive contribution that is above and beyond normal expectations to their home, school or community.”

Each month during the school year, one student is selected for recognition, not as a winner, but as representative of all students receiving recognition.

Johnson said 2018 marked the third annual banquet for the CIA program now in its fourth year.

He said “character” is currently the focus of all the proceeding in Washington that have been making the news, “whether a certain individual has the character to serve on our nation’s highest court.”

Johnson also referenced Col. Glenn Dowling Frazier of Fort Deposit who recently passed away at age 94, who was forced into the infamous Bataan Death March at the hands of the Japanese during WWII and who spent three and a half years in a Japanese Prisoner of War Camp.

Johnson said, “Upon his (Frazier’s) release, one of the things that struck me was that he forgave his captors. That’s character.”

Burroughs said educators often get caught up in dealing with misbehaving students. But he said, the CIA program affords them the opportunity to tell great students that “they are doing the right thing, to congratulate them and thank them for the great things they are doing.”

He thanked Johnson, the parents and the students and said, “Good character will take you a long way in life.”

Hardy told the young people being honored Thursday the story of Nehemiah in the Bible… who because of his character was instrumental in the rebuilding and reestablishment of Jerusalem.

Hardy also challenged the students saying, “You all have no idea of the plan God has for your life… And when trouble comes to a nation, God always has people he is looking for to work in and through to restore a nation. Who knows whether or not that might be one of you… simply because you continue to walk in proper character and maintain your integrity.”

The students selected as CIA honorees during the year receive a certificate, a CIA T-shirt and a $50 gift card.

And the banquet Thursday, the honorees were presented with medals and a book bag. 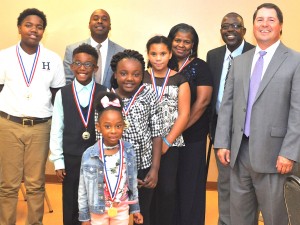 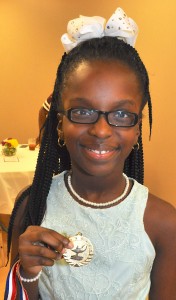