Col. Glenn (Dowling) Frazier, 94, a native of Fort Deposit and survivor of the infamous Bataan Death March at the hands of the Japanese in WWII, died on Saturday, Sept. 15 at Thomas Hospital in Fairhope, Ala.

A resident of Daphne, Ala. at the time of his death, Frazier was author of the book “Hells Guest “about his life and experiences at the hands of the Japanese and the subject a full-length feature film and documentary being made about him.

His wife 15 years, Elizabeth Terri Frazier, said he died of cardiac arrest. But she said he gave her hand a squeeze at the hospital before his death.

While Frazier was cremated at Wolfe-Bayview Funeral Homes & Crematory Inc. in Daphne, a celebration of life will be held at the USS Alabama Battleship Park Pavilion in Spanish Fort, Ala. on Oct. 26 from 11 a.m. until 12:30 p.m. and burial will follow with a full military funeral at the Alabama State Veterans Memorial Cemetery at Spanish Fort at 1:30 p.m. that same day.

Terri Frazier said of her late husband, “I have known this man for 25 years. I was married to him 15… Whoever was in front of him, that’s who he ministered to about forgiveness.” She said, “He forgave the nation of Japan.”

The book, upon which the feature film “Hell’s Guest” will be based, tells the story of a 16-year-old farm boy from Fort Deposit who goes to war and ends up in the Bataan Death March suffering at the hands of the Japanese.  His family was told he was dead.

Among those interviewed for the documentary, along with Frazier, were Frieda Cross, owner of Cross Printing and former owner of The Lowndes Signal, and Mary David (Harrison) McCraney who had been a classmate and fiend of Frazier’s late sister, Betty Carolyn Frazier.

Dropping in to see Frazier during the filming of the documentary at the church, where the Frazier family attended and where Frazier said he gave his life to Crist, was his niece Wanda Frazier Lambert.

Frazier also met Lowndes County Middle School Principal Toriano Baker, to whom he presented a signed copy of his book for the school library.

Arvan said the crew came to Fort Deposit because, “This is really where his story began and what made him the person that he was that helped him survive the Bataan Death March. The entire first chapter of his book is all about Fort Deposit and his childhood here. And when he came home, this is where he came to.”

Arvan said in a previous trip to Fort Deposit, they discovered a The Lowndes Signal article about Frazier’s story. And, he said, the documentary crew wanted to immerse themselves in the place where it happened.

McCraney said they were probably told at school when Frazier was a prisoner of war and “everybody was just heart-broken.” She said the family was really affected and it was a sad time.

She said of his homecoming, however, “Everybody just went wild… because everybody loved the whole family.”

She said of Frazier’s forgiveness of the Japanese who imprisoned him and put him through the death march, “It takes very strong Christian character person to do that. If you can forgive anything like that, it takes a really strong person.  You just have to have it in your heart and think about it and pray about it… Everybody was so thankful to see him get back home.”

Frazier’s military awards included the Metal of Freedom, a Bronze Star and four Purple Hearts. On Dec. 27, 2007, he was recognized in the Congressional Record for his courageous service during WWII.

He was selected by Ken Burns to be featured in the historic PBS documentary, “The War,” in which Frazier appeared throughout the seven segments. 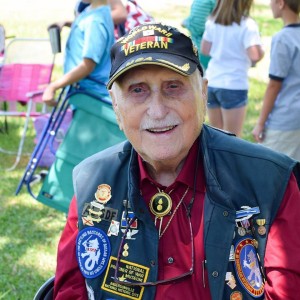