The Lowndes Academy Rebels had their chances Friday night, Sept. 7, but came up short against Patrician Academy 13-6 in their first regional game of the season at home 13-6.

Despite 267 yards of rushing by the Patrician Saints, Lowndes (2-1, 0-1) held tough, giving up zero passing yards and only 13 points to the team that knocked them out of the AISA Class A state championship playoffs last year.

The Rebels had at least three scoring opportunities in the game Friday night that came up empty.

Unfortunately, both Lowndes and Patrician (3-1, 1-0) stepped up to Class AA, Region 2 this year, and the first loss under first-year head football coach Shane Moye was the first regional counter for both teams.

Last season, the Rebels lost to the Patrician Saints 28-20 in the first round of the AISAS Class A playoffs.  And the Saints went on to win the Class A, AISA State Football Championship.

Moye pointed to Friday’s contest as a key game to show where the Rebels stood after week three.

Moye said of Friday’s game, “We got inside the red zone three times, should have scored all three times and kind of shot ourselves in the foot.”

He said off sides penalties and holding calls hurt his Rebels.

While Moye said his defense played well and held its own, he said, “We’ve just got to make plays. We had plenty of chances to win that football game, and it kind of feels like we let one slip away tonight.”

Moye said the game was a good test for the Rebels and his kids fought hard.

He had praise for Lowndes Rebel Trevor Haney, who he said “ran the ball hard.”

The Rebels actually had the more balanced attack with more total offensive yardage that the Saints. Lowndes has 168 yards passing and 106 yards rushing for 274 total yards. Patrician had 267 yards total offense, all on the ground.

Lowndes’ Tyler Smith was 12 for 23 passing for 168 yards with one interception.

McCurdy led the Rebels on defense with nine tackles and three assists. But Gus Pages had seven tackles, two assists, one sack and one tackle for loss. Daniel Calloway had four tackles, one assist, one sack and two tackles for loss. And Janes had an interception and a fumble recovery.

The Saints got on the scoreboard first, Friday night, with a 1-yard run by Garrett Lewis and a point after at the 4:33 mark of the first quarter.

Set up by a 61-yard pass to Zack Miller, McCurdy would answer the bell for the Rebels on a 2-yard run at the 6:59 mark of the second quarter. The point after failed, but the Rebels were hanging tough, tailing 7-6.

But Dalton Mckenzie, who led the Saints in rushing with 18 carries for 165 yards, walked into the end zone on a 17-yard run to make the final score 13-6 at the 10:34 mark of the fourth quarter.

The Rebels made a final push that reached the Patrician 18-yard line. But the drive stalled with an incomplete fourth down pass with 50 seconds left in the game.

Lowndes will have another opportunity for a regional win Friday, Sept. 14 on the road at Hooper. 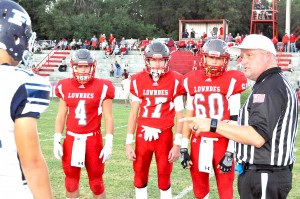 Rebels rush onto the field through a curtain of smoke to face Patrician in their first regional contest of 2018. 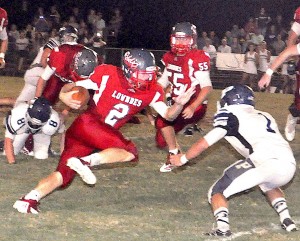 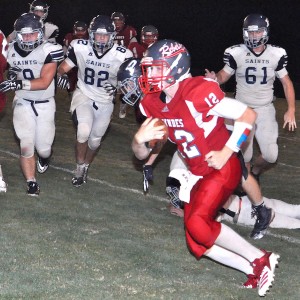 Tyler Smith (12) is pursued by the Patrician Saints.