Burroughs was the unanimous choice of the Lowndes County Board of Education following an interview process that involved four finalists at a special called meeting of the board held Tuesday, Aug. 21.

The meeting and selection process began at the central office in Hayneville at 4 p.m. and ended nearly four hours later with the offer of a contract to Burroughs.

Prior to his selection Tuesday night, Burroughs served the Lowndes County Public School System for 22 years in several capacities including school teacher, principal, education specialist and assistant school superintendent for about 12 years. He has also been a unit and education training manager/electrician for the Alabama Air National guard since 1992.

The finalists were selected following a survey of county residents by the Alabama Association of School Boards.

Burroughs replaces Dr. Daniel Boyd in the position, who was unanimously appointed deputy state superintendent of instruction by vote of the State Board of Education and Gov. Kay Ivey.

Burroughs told the school board Tuesday night that he should be selected for the superintendent’s position because he was the “best candidate” and because he “knows what the school system needs.”

After going into executive session to discuss good name and character in order to consider a contract for superintendent, it only took the board 25 minutes to return and make its decision.

The vote offer Burroughs a three-year contact to Burroughs under the same terms as the previous superintendent, effective Sept. 1 subject to his acceptance of the position and resignation from his previous position in writing, was made by Board member Steven T. Foster and seconded by Board member Travis Rogers.

According to Rogers and School Board President Ben Davis, Burroughs contract to be negotiated will pay between $110,000 and $120,000 annually.

Following the unanimous vote, Burroughs received applause from those attending the meeting and congratulations from Davis.

Davis said, “We feel you are going to make us a very good superintendent, and we look forward to working with you as we continue to move our school district forward.”

Burroughs thanked the board for his selection and the confidence shown in him.

Board member Robert J. Grant told Burroughs, “I expect a lot from you. And you are going to come through.”

Board member Donald J. Carter said he did not realize Burroughs spent his entire career at Lowndes and called him, “basically home grown.”

Burroughs told the Signal, “I’m looking forward to continuing to move this district forward. And then, united in excellence, to empower, engage and educate while creating pathways to success.”

He has been married to his wife, Freda, for 20 years and they a 15-year-old daughter, Jada, and a 20-year-old son, Jason Burroughs Jr.

Jada said of her dad, “I’m really proud of him, and I’m glad God blessed him with this job.” 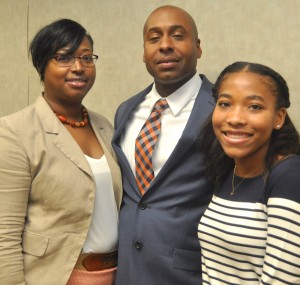