The Lowndes Academy Rebels took down the Fort Dale Eagles 27-0 in a pre-season scrimmage in Hayneville, Friday night, Aug. 17.
The game featured alternating quarters of first teamers against first teamers and subs against subs.
And Fort Dale disrupted its own offensive drives against a fast, athletic Lowndes squad with numerous penalties.
Fort Dale head football coach James (Speed) Sampley took his team into Rebel territory down 15 players from last year’s squad.
He said following Friday night’s scrimmage, “When we’re doing what we’re doing on offense, we cannot shoot ourselves in the foot. We cannot fumble. We cannot not block somebody who is key. You’ve got to execute… you can’t get penalties. You know, all of that is going to stop you.”
He said, “Lowndes played good and hard,” but he said his team has to do a better job on its part.
Sampley said he has a bunch of players who have not played a lot of football and down in numbers.
But he said that’s why scrimmage like Friday’s against Lowndes are important.
Sampley found good things to say, however, about fullback Cade Mansmann, who he said had a good night, and Caden Coker, who he said had a good night as linebacker and fullback.
He said, “In the offense we’re running, the fullback has got to make plays.”
First year head football coach Shane Moye said of his Lowndes Academy Rebels, “We played with a lot of intensity, which is what we were shooting for.”
He said, “We’re excited,” but he said, “We had a bunch of mistakes. We’ve got a bunch of things we’ve got to do.”
However, Moye said, “We’re excited for what this team can do. I was real impressed with how tonight went.”
Moye said, “We have a tenth guard, Thomas Franklin, we kept running behind… He was whipping them up front. I was real proud of him.” He also said ninth grade quarterback Colby Briggs played well and “handled the pressure.”
He said Trevor Haner, John Morgan and Daniel Janes all played well, and Zack Miller had a great game running the football.
Janes scored the first touchdown of the night for Lowndes on a 15-yard run, and Rostik Smith added the point after at the 4:55 mark of the first quarter.
Will Cannon got into the act scoring from 13 yards out, and Smith added the point after at the 6:57 mark of the second quarter.
And Cannon scored again from 39 yards out at the 1:51 mark of the second quarter to give the Rebels a 20-0 lead at the half. Fort Dale blocked the point after.
The final score of the night came when Daniel Calloway picked up a Fort Dale fumble and rambled 55 yards for a touchdown with 10:19 left in the third quarter. Smith added the point after and the Rebels claimed a 27-0 victory.
Lowndes will get the football season started for real on Aug. 24 on the road against Sparta. 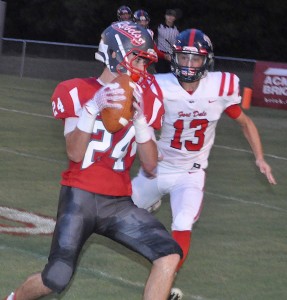 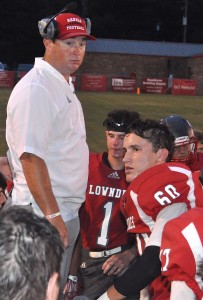 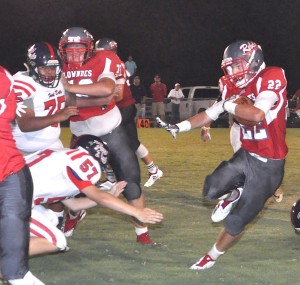 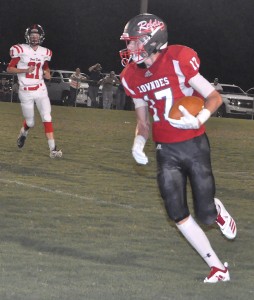