On Monday, Alabama 7th District Congresswoman Terri A. Sewell received “tentative” approval for a moratorium on fines and actions by the Alabama Department of Public Health against homeowners in Lowndes County for improper or failing septic tanks systems in order to determine the scope of the problem in the county.

Sewell made the request following a tour of home sites in Lowndes County and a Rural Alabama Wastewater Infrastructure Meeting she hosted July 30 at the Lowndes Interpretive Center on U.S.  80 in White Hall.

She held the meeting to find solutions and funding for sanitary sewer system access for unserved Lowndes County residents in what she called a “pilot program” involving the Alabama Department of Public Health, state agencies and universities.

Lowndes County has been the subject of national attention due to lack of access for many residents to sanitary sewer systems, as well as failing existing or improperly installed septic tank systems.

He said, “We’ve been looking at places that have terrible sanitation situations where there is raw sewage spilling out into the open. People have been telling me about the great costs

involved in the septic tank system and so on. And I think there is a sense that there should be a more comprehensive state program to try and address these issues.”

Media and officials who took a tour of Lowndes County sites on Monday saw examples of straight piped raw sewage flowing on the ground in the Tyler (White Hall) and Farmersville area of the county and a failing homemade septic tanks system in the Farmersville area.

They also saw a new septic tank system that was installed for free for Willie Mae Spivey off Bowie Circle in Tyler (White Hall).

Spivey bought a home in 1979 for which a septic tank was installed with no field lines and a straight pipe was run.

Sherry Bradley of the Alabama Public Health Department (ADPH) said the free system was installed in partnership with the Alabama On Site Wastewater Association. She said other systems have also been given away. “We do what we can.”

Sewell provided information that a 2015 U.S. Census Bureau American Housing Survey showed 20 percent of all homes in the United States are served by decentralized wastewater treatment systems because connecting to municipal utilities is either not an option or too expensive.

She also provided information that in 2005, one unnamed Alabama county was found to have 60 percent of homes inspected with straight pipe septic systems. And in 2017, three counties in Alabama had more than 50 percent of rural residences with raw sewage on the ground.

More, she provided information that as of 2015, 1.25 million homes across all 50 states lacked adequate plumbing and nearly 200,000 homes were without a sewage system all together.

Among those who were scheduled to be present for the meeting held Monday in Lowndes County were Perman Hardy, a county resident and community leader working with ADPH,  Chris Beaker and Nivory Gordon of USDA, Sherry Bradley of ADPH, Joe Kelly and Sonja Massey of the Alabama Department of Environmental Management (ADEM), Dr. Mark Bennett of Auburn University, Dr. Kevin White and Nick Lawkis of the University of South Alabama, Dr. John Higginbotham of the University of Alabama, Royrickers Cook of Auburn University, Thomas Minetree and Melissa Herkt of Auburn University Engineers Without Boarders, Dr. Upmanu Lall of Columbiana University by phone, and Shaunte Stallworth of Rural Communities Assistance Partnership/Communities Unlimited.

Dr. White of the University of South Alabama told the Signal Monday that State Health Officer Dr. Scott Harris M.D. gave a “tentative yes” to Sewell’s requested moratorium on actions against homeowners in Lowndes County.  “But,” White said Harris told him the ADPH “will have to look at it because they can’t discriminate one county to another.”

White said, “They have to equally apply rules and regulations. But tentatively they want to work with this project and they will try to get a moratorium temporarily in place.”

Sewell said Monday she wants action and what can actually be committed to doing about the problem as a result of what was seen on the tour of Lowndes County.

She thanked homeowners who allowed the tour on their property to see what she said “this crisis looks like.”

Sewell said, “Frankly, I call it a crisis because it is. In America where we are the greatest nation in the world, no one should live in unsanitary conditions on our watch.”

She stressed, however, that this problem is not just in the 7th Congressional District in Alabama which she serves. But she said it is a problem of “decentralized” wastewater systems in America.

Sewell explained that decentralized refers to homeowners who live in communities where they are not connected to the county and city water/sewer lines. “They have a decentralized system, sometimes a septic tank… sometimes not.”

She said, “The reality is when people have straight pipe and untreated wastewater pooling, sinking into the soil, going into creeks, it becomes a public health crisis.”

Sewell stressed that problem and its scale have to be identified. She said “That means we can’t see everything as a violation, but rather as an opportunity to come up with a workable solution… for a sanitary, healthy, humane way for us as Americans to live.”

Sewell said Monday, “I’d like the takeaway to be a commitment from those of us around the table… state, feds, local community leaders, the public health department, as well as engineers” to items that can be committed to “that will move from studying the problem to a workable solution to the problem.”

White said in 2005 a survey of more than 2,000 homes in Bibb County showed 10 to 15 percent had straight pipe, another 25 percent had some type of onsite wastewater system but in total some 50 percent of rural homes “had raw sewage on the surface of their property.”

He said the conclusion was the at the Black Belt probably had more than 50 percent failure of such systems based on soil conditions.

White suggested trying to expand municipal systems in Lowndes County to capture additional homeowners with USDA funding. And in the rural areas, he suggested putting in small wastewater plants to capture homes in clusters, as well some onsite septic tank type systems.

White said the challenge is finding an entity capable to do this be it, municipal utilities, rural water utility or power company.

However, it was pointed out in the discussion that in these cases homeowners have to pay a sewer fee of about $35 per month.

Sewell clarified that even if the funding were found for these systems there would still be a management fee that would have to be paid by residents.

Hardy said paying $35 was better than the expense of damage from sewage backed up inside her house.

Sewell said she could make a case that citizens would have be “all in” on such a project. But she told those represented at the meeting, “I also realize that some people will not have the financial means. And so, we need to deal with that as well.”

It was pointed out that it took White Hall five years to get a grant funded sewer project going that only involved 54 homes and there are still customers who have not signed up for the service.

Bradley pointed out that a campaign is starting in Lowndes County this August featuring Hardy which includes gas pump toppers with Hardy’s photo asking, “Are you a good septic tank owner? Don’t pour hard products down the drain if you have a septic tank system (e.g., oils, grease, chemicals, paint medications). For more information contact your local health department. Alabama Public Health alabamapublichealth.gov/onsite. 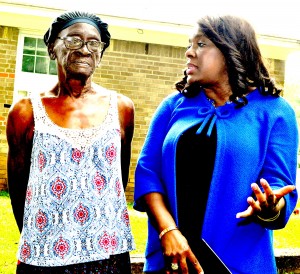 Willie Mae Spivey with Congresswoman Terri A. Sewell received a free new septic tank system with the help of the Alabama Department of Public Heath. 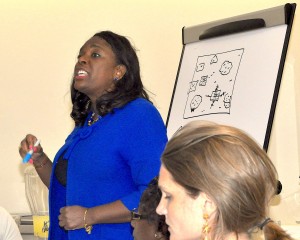 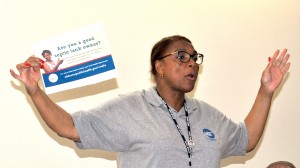