Lowndes Academy head baseball coach Shane Moye of Hope Hull has been a fixture of Lowndes Academy sports the past six years. And, as the fourth new head football coach for the school in those six years, he says he wants to be a source of “stability” for the kids under his leadership.

Some six years ago, Lowndes Academy Athletic Director Matt Marshall announced the hire of Moye, 26 at the time, as fulltime junior varsity and head baseball coach.

Going into the 2018 football season and moving up from Class A to Class AA in the Alabama High School Athletic Association (AISA), Lowndes Academy Board President Sanford Rosser recently confirmed the hire of Moye to also serve as the new football coach for the school.

Moye came to Lowndes Academy as a former college baseball player and instructor from Strike Zone in Montgomery. At the time, he and his wife, Kayla, were celebrating the recent arrival of their baby daughter, Parker Elizabeth Moye.

Today, Shane and Kayla have Parker, age 6, another daughter Pearsyn, age 3, and a son, Wilson, age 1.

Moye is a native of Pensacola, Fla. and a 2004 graduate of Pensacola Catholic High School where he received All-Area honors in 2003-04 and led his team to a state title as a junior.

Moye played at AUM in 2008-09 where he earned All-Southern States Conference honors before serving as a graduate assistant coach in 2010.

He spent 2007 as an assistant coach at Pensacola Catholic High School, and coached hitting, defense and travel ball at Strike Zone for three years.

In addition to serving as head baseball coach at Lowndes Academy, Moye assisted with football four the of the past six years.

Moye said he always thought he wanted to coach college ball, but since he has been with Lowndes Academy, the school has been “awesome” to his family. And, he said, “It is just a great place for my kids.”

He said, “If I am looking out for what’s best for my family, it’s to hopefully continue be at Lowndes for as long as they will let me.”

Moye said he is excited about the future and said one of the reasons he wanted to be the head football coach is because, “I wanted the kids to have stability, and, hopefully, I can be the coach for years to come because I think it is important for the kids to have structure and know who is going to be their coach year in and year out.”

He also said he did not want the Lowndes kids to go through any down times and wants to build off of what former head football coach Bob Taylor did while he was at Lowndes.

Taylor is now the headmaster at Meadowview Christian School in Selma.

Moye said he is going to concentrate on “discipline and accountability” and will hold the football team to “a higher standard.”

He said his goal and vision is for Lowndes football to be like it used to be in the old days… “hard-nosed where when other teams come to play us they will wake on Saturday morning and know they’ve played Lowndes.”

He said he anticipates the football team will dress out 27 players this year, grades 9-12, including seven seniors and about 14 juniors.

Offensively, Moye expects to run the Double Wing and Spread offense with a fast, athletic group of kids. He said a majority of the offensive line returns from last year and will be almost entirely all 10th and 11th graders.

Moye said the team will run the ball, but will also be able to throw and should be in the mix for the playoffs.

He also said Mike Ellis of Pro Impact, a physical therapist who is in charge of the weight room for Huntingdon and Faulkner football teams, has helped Lowndes put together what Moye calls a “college type workout” for the football team.

Moye said with him serving as both head football and head baseball coach, the kids under him with be held accountable for the entire year.

Lowndes is moving up from Class A to Class AA in football where it will play in Region Two against Clarke Prep, Escambia, Hooper, Patrician and South Choctaw.

Last season the Rebels lost to Patrician Academy 28-20 in the first round of the AISAS Class A playoffs and ended the season at 5-5 overall, counting the playoff loss. 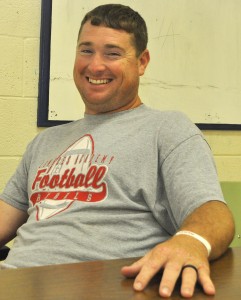