Boyd, who was recently hired by the State Board of Education to serve as deputy superintendent of instruction for the Alabama Department Education, tendered his resignation to the Lowndes BOE.

And after voting to hire Burroughs as interim superintendent, the board also agreed to use the Alabama Association of School Boards in its permanent superintendent search.

Boyd’s resignation was accepted by the board effective June 28. And Burroughs will serve as interim superintendent effective July 2.

Since 2005, under Boyd’s leadership, the Lowndes County Public Schools graduation rate improved from 60 percent to 91 percent in 2018. The reserve funds were increase from less than a month to 4.6 months, sixth highest in the state. And the school system received more than $25 million in grants to improve teaching and learning.

Burroughs has served the Lowndes County Public School System for 22 years in several capacities including school teacher, principal, education specialist and assistant school superintendent for the past 11 years and 11 months. He has also been a unit and education training manager/electrician for the Alabama Air National guard since 1992.

Burroughs said he “eager, excited” and ready to move the district forward.

Boyd told the board, “It is with a heavy heart I’d like to submit my letter of resignation. I’ve worked with the school district for 17 years… 12 of those 17 years have been as superintendent.”

He said there is a fine group of individuals on the school board and that he appreciated working with the team he had at the central office and that a lot was accomplished.

Boyd said, “Special thanks and gratitude goes to my executive assistant Yvette Patterson, who has a whole lot of wisdom and the love for children and love for this system that is second to none.”

He also said he appreciated what Lowndes County has done for him and appreciated the community which embraced and helped him and helped the school district. He called it a “great experience.”

Lowndes BOE President Ben Davis told Boyd, “We certainly appreciate what you have done for this school district.” He said when Boyd came, the school district was still using coal fired furnaces, but all of the buildings have been renovated, the school buildings are “conducive for learning” and the system is in a “great financial shape.”

Davis also said, “Academically I believe we are moving in the right direction.”

In board comments: Robert James Grant told Boyd that he hoped that Boyd and the school system both continued to rise. Donald J. Carter congratulated Boyd on his advancement, but said he hated to see him go. Travis Rogers told Boyd he was appreciated.

Lowndes BOE Vice President Steven Foster said one of Boyd’s greatest accomplishments was not listed during the meeting and that is, “Throughout your tenure year, you have shown the highest of ethical standards, and you are a man of high character, and you have modeled that to everyone, and I appreciate it.” He led the board in applause for Daniel. 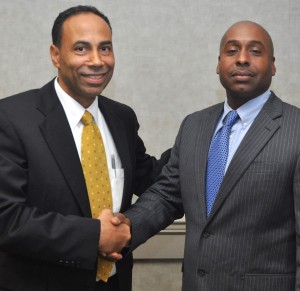