Based on unofficial results, there were two clear winners in local Lowndes County Democratic Primary races on Tuesday, June 5, for district court judge and sheriff.

Johnson and Williams are considered elected as there is no Republican opposition in either of their races.

“I didn’t have no doubt that I would automatically go back in for the people,” Sheriff Williams said following the unofficial vote count, Tuesday night. “I’ve been with the (sheriff’s) department 40 years.”

Williams said, “The people, they didn’t lie to me. The citizens of Lowndes County supported me like they said they would.” He said, “They’ll vote me out when they get tired of me. They said that wasn’t no time soon.”

He concluded, “Thank God, it’s all over.” 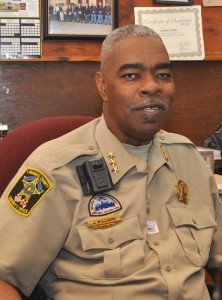 Flash flood warning for Lowndes until 1:45 p.m.Wednesday, May…