After making contact with a shooting victim in the early morning hours of Tuesday, May 1, the Lowndes County Sheriff’s Office, with the help of the Fort Deposit Police Department,  arrested and charged a Letohatchee man with assault and drug charges, among others.

He said, “Perdue was already out on bond for unrelated charges from various agencies.”

Cognasi said the arrest stemmed from a shooting with non-life threatening injuries that occurred in the early hours (near midnight) of April 1 in the area of Lowndes County Roads 33 and 37.

He said a Lowndes Sheriff’s Deputy pulled a vehicle over for speeding in the county and found the shooting victim, who has not been named, inside the vehicle. He did say the victim is also from Lowndes County.

He said the shooting victim was taken by ambulance to L.V. Stabler Memorial Hospital in Greenville for treatment.

Upon learning that Perdue was the shooting suspect, Cognasi said Perdue was found at his residence in the Letohatchee Community off Lowndes County Road 37 and taken into custody with the help of Fort Deposit Police.

He also said, “When we searched his residence for any other persons or weapons, we discovered synthetic marijuana, marijuana, powder cocaine, crack cocaine and ecstasy.”

He said also found was $810 in cash and a weapon, which was not described.

Cognasi said Perdue was transported to the John Hulett Detention Facility where he is currently being held on a $35,000 bond for the assault in the first degree charge.

He said Perdue also ran from the Prattville Police Department in November and is well known to area law enforcement. 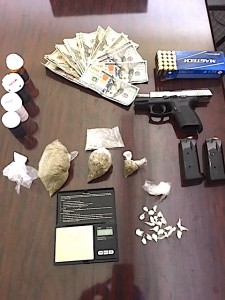 Cash, a weapon and drugs allegedly found during the arrest of a Letohatchee man at his home following an early morning shooting, Tuesday, April 1, in which he was the suspect. Submitted. 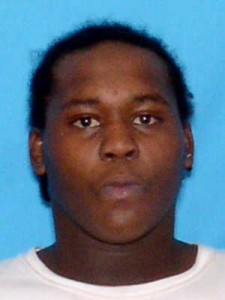