A documentary on the life of Col. Glenn D. (Dowling) Frazier, a native of Fort Deposit and survivor of the infamous Bataan Death March at the hands of the Japanese during World War II, is in the works along with a full-length feature film based on his book “Hell’s Guest.”

Filming of the documentary on the life of Frazier, now 94 and a resident of Daphne, Ala., took place in Fort Deposit on Thursday, April 5 at Cross Printing (current office of The Lowndes Signal), at Fort Deposit United Methodist Church, at the site where the Fort Deposit Train Depot once stood, at Lowndes County Middle School (formerly Fort Deposit High School where Frazier played football and basketball and graduated) and at the site of the old Fort Deposit High football field behind LCMS. Frazier visited all of the sites along with his wife, Terri.

The book, upon which the feature film “Hell’s Guest” will be based, tells the story of a 16-year-old farm boy from Fort Deposit who goes to war and ends up in the Bataan Death March suffering at the hands of the Japanese. His family was told he was dead.

Among those interviewed for the documentary, along with Frazier, were Frieda Cross, owner of Cross Printing and former owner of The Lowndes Signal, and Mary David (Harrison) McCraney who had been a classmate and friend of Frazier’s late sister, Betty Carolyn Frazier.

Dropping in to see Frazier during the filming of the documentary at the church, where the Frazier family attended and where Frazier said he gave his life to Christ, was his niece, Wanda Frazier Lambert.

Frazier also met Lowndes County Middle School Principal Toriano Baker, to whom he presented a signed copy of his book for the school library.

Arvan said the crew came to Fort Deposit because, “This is really where his story began and what made him the person that he was that helped him survive the Bataan Death March.

The entire first chapter of his book is all about Fort Deposit and his childhood here. And when he came home, this is where he came to.”

Arvan said in a previous trip to Fort Deposit, they discovered a The Lowndes Signal article about Frazier’s story. And, he said, the documentary crew wanted to immerse themselves in the place where it happened.

In an interview at Cross Printing (The Lowndes Signal office) McCraney said she lived in Fort Deposit all her life, was born at St. Margaret’s hospital in Montgomery and is now 84-years-old.. She said she lived directly across from the old Fort Deposit Train Depot, which has since been lost to time.

McCraney said, “During the war, we’d get out and watch the troop trains, and they’d throw us hats and insignias and things. And we had a great place to grow up.

It (Fort Deposit) was a people that were all congenial and got along well. I would love, if I could have children again, to be able to have a place like Fort Deposit was when I grew up and it was all the way through high school ”

She explained that she was friends with Dowling’s (Frazier’s) late sister, Betty Carolyn Frazier James, with whom she attended school and graduated.

She said, “We mostly went to her house in the afternoon after school to get cookies out of Mrs. Frazier’s cookie jar.” And she said of the Frazier’s, “They were just nice, ordinary people. And I just enjoyed going there. She described Frazier as a “nice very friendly, neat looking person.”

McCraney said they were probably told at school when he was a prisoner of war and “everybody was just heart- broken.” She said the family was really affected and it was a sad time.

She said of his homecoming, however, “Everybody just went wild… because every- body loved the whole family.”

She said of Frazier’s forgiveness of the Japanese who imprisoned him and put him through the death march, “It takes very strong Christian character person to do that. If you can forgive anything like that, it takes a really strong person. You just have to have it in your heart and think about it and pray about it… Everybody was so thankful to see him get back home.”

Cross said she and her late husband. Cecil, purchased The Lowndes Signal and the print shop, which is now Cross Printing, in 1960. She has many of the very old bound volumes of the Signal, including the Oct. 26, 1946 issue which contains the article, “Dowling Frazier Tells Of Life In Jap Prison Camp.”

She said of Frazier, “I think he is a magnificent human being to have gone through what he has gone through.” And she said, “I think it is wonderful that we are pushing this and putting it in the historical perspective that it should be put in.”

She said, “People need to know that there are a lot of men and women out there who have given their lives for the freedoms we have.”

She said she once saw something about a young boy who didn’t want to stand up to salute the American flag. She said a man in a wheel chair with no legs told the child, “I gave my legs to give you the right not to stand up, not to salute that flag.”

She said Frazier came from a big family that has always been a part of Fort Deposit and that she could not think of a better place to live and raise her children.

Cross said of the importance of sharing Frazier’s story, “These young people absolutely do not understand the value of the life that they live today.”

Cross said she saw another sign that said, “There is nothing worth dying for.” And she said of someone with that attitude, “Well, if they feel that way, there are no help to anyone, not even themselves.”

The movie to be based on Frazier’s book also deals with another aspect of the Bataan Death March. A conflict among the prisoners of war themselves.

Lambano said he plays a not so nice character in the movie, a prisoner of war who “was actually somewhat of a traitor.”

He said there was one character who used his rank as an excuse to kind of cozy up to the captors. “And,” he said, “If anyone was caught sabotaging, not doing their nwork properly or pretending they were sick… he would rat them out to save himself.”

As part of the documentary, Frazier walked out on the old Fort Deposit High School football field where remnants of a concession stand, press box, scoreboard and even the old goal posts still stand.

He also visited the old high school, now Lowndes County Middle School, where he walked down the halls, stood in the auditorium, which, he said, was the old basketball court.

According to his website, “Hell’s Guest” is Frazier’s autobiography, and “is one of the most compelling books ever written about the Bataan Death March. The story of a young boy from Alabama who finds himself in the middle of war just months after joining the Army. Along with tens of thousands of other men, Glenn is forced to walk seventy miles without food or rest after U.S. forces surrender to Japan on the Bataan peninsula. Now a prisoner of war, Glenn finds himself imprisoned in Japan and forced into slave labor.

“Hell’s Guest takes you into the mind of a soldier who faces starvation, disease, and abuse at the hands of his captors on a daily basis. But even as he looks into the eyes of his executioner, Glenn manages to find hope. See how Glenn’s story can bring hope into your life today.”

Regarding The Lowndes Signal, Seth Kenneth and Jewel Davis Perry purchased it in July 1946. The Perry’s continued as editor and publisher until July 1960 when the newspaper and the Perrys’ interest in a job printing business were sold to the late Cecil B. Cross Jr. and Frieda Brown Cross.

The Cross’ moved the newspaper and business back to Fort Deposit from Montgomery, where it had been located for a brief period, into the same building which had previously housed the newspaper.

They continued with the newspaper, which covered the entire county, and their printing business until the newspaper was sold to Boone Newspapers, headquartered in Tuscaloosa, Ala., in June.

Today, The Lowndes Signal continues to serve as Lowndes County’s only newspaper.

Below: Glenn D. Frazier walks the halls of Lowndes County Middle School (LCMS) (old Fort Deposit High School where he played football and basketball. Frazier meet LCMS Principal Toriano Baker for whom he signed a copy of his book “Hell’s Guest.” Frieda Cross of Cross Printing (former owner of The Lowndes Signal) helps tell Frazier’s story for a documentary of his life and his forced participation in the Bataan Death March. Frazier with Cross and Mary David (Harrison) McCraney, a childhood friend of his late sister. Frazier with his wife and Cross at Fort Deposit United Methodist Church. And a 1946 copy of The Lowndes Signal featuring an article on Frazier. (Signal photos/Fred Guarino) 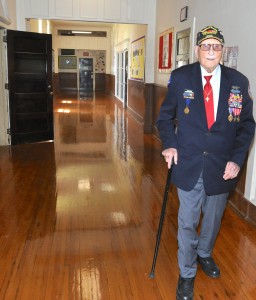 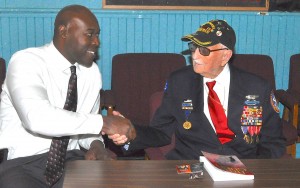 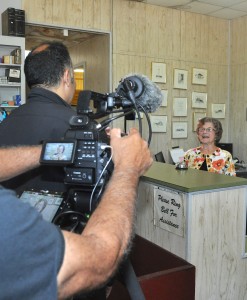 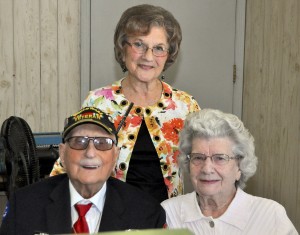 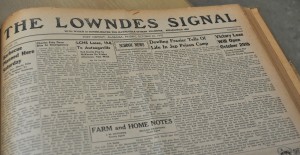 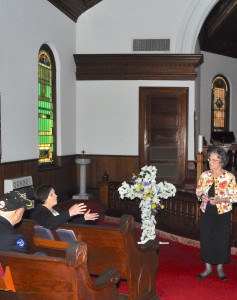