In addition, the Fort Deposit Police Department is also taking advantage of a grant and loan to get much needed equipment, as well.

All of the grants and loan proposals that have been approved, including that for Fort Deposit, were written former Lowndes County Sheriff’s Office Chief Deputy Chris West, who actually retired this past Friday.

West, the jail in Lowndes County was constructed in 1999 when the late Willie Vaughner was sheriff. And, he said of the John Hulett Detention Facility in Hayneville (the county jail), “We haven’t had any upgrades since then.”

He said also camera system at the jail, inside and out, uses old analog cameras with “distorted images.” And he said, “We currently don’t have a jail management (software) system.”

West said with Montgomery Technology Systems (MTS) having the best price, the Sheriff’s Office came up with a project including a control system for doors at the jail, new camera throughout the facility with new video monitors and jail management software to streamline the processing of inmates in and out of the jail, etc.

West said while the details are still to be finalized, he the Lowndes County Sheriff’s Office has been approved for a grant/loan of $186,962 from USDA (United States Department of Agriculture) for this purpose.

Lowndes County Sheriff John Williams said the new cameras will be a big help at the jail where he said, “There are a lot of dark spots.”

West said the Sheriff’s Office has also been approved for a $33,000 grant from the Department of Homeland Security for an X-ray scanner and walk through metal detector at the Lowndes County Courthouse.

He said that new equipment has been installed and is now in use and the cost will be reimbursed.

He said, “It is software based equipment” and the X-ray scanner “actually detects explosives, which was something our old one did not do.”

In addition, West said, the Alabama Department of Economic and Community Affairs (ADECA) has also approved the Sheriff’s Office for a $24,000 grant to purchase 16 rugged Dell tablets.

He those will replace old laptop computers that had been donated to the Sheriff’s Office by the Alabama Law Enforcement Agency (ALEA).

He said patrol units and investigators will make use the tablets to do all of their paperwork including incident and offense reports and arrest reports. That is another project for which the Sheriff’s Office will be reimbursed.

The Sheriff’s Office will be reimbursed for those costs, as well.

Williams said he was pleased about the vests which can be worn outside the uniform.

The Lowndes County Sheriff’s Office currently employs about 12 deputies and four investigators, not including the sheriff and chief deputy.

Terry Steiner is police chief in Fort Deposit. He said his department was very much in need up upgrades with vests, body cameras, vehicles and tablets. 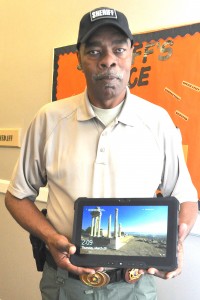 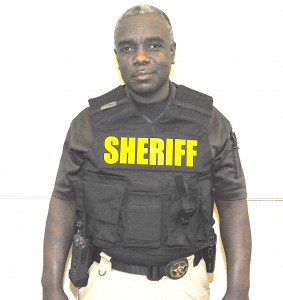 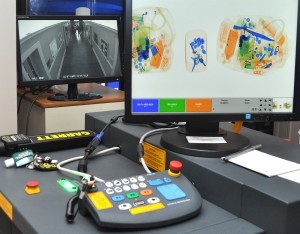 On the left, Sheriff John Williams shows off new Dell tablets purchased with a grant from ADECA. On the right,
Sgt. Lenny Lee shows off a new ballistics vest carrier. Below, a new security system installed at the Lowndes County
Courthouse includes new scanner equipment and monitors. Scanner images pictured in blue include a knife in a
purse, keys and coins in small container and a bag with a taser inside. Signal photos/Fred Guarino