Samba in the Streets comes to Lowndes County School

Teaching Lowndes County children about their own culture and the culture of others, Viver Brasil (pronounced “Veevay Brasil”) Dance Company, an award-winning Afro-Brazilian dance theater company based in Los Angeles visited Hayneville Middle School and Jackson-Steele Elementary on Monday, March 5 and the Calhoun School and Lowndes County Middle School in Fort Deposit on Tuesday, March 6.

Led by Viver Brasil’s vibrant company of dancers and musicians, the children learned and performed celebratory Afro-Brazilian dance with accompanying drum rhythms through Samba in the Streets Alabama.

Burroughs said the project is not just physical exercise but mental, cultural and social exercise to create a larger appreciation of the arts and culture.

Burroughs said Yudin’s company received a grant do to this in California, and when Burroughs heard about it, she said she thought, “This will be great for Alabama.” She said Yudin then received a larger grant to bring the program to Alabama.

Also helping to bring Samba in the Streets to Lowndes County were Ronda Daniel, who is wife of Hayneville Mayor David Daniel and who serves as librarian at Hayneville Middle School and Jackson-Steele Elementary School, and her brother Barry Johnson.

They both described themselves as “middle persons.”

Daniel said Johnson asked her about bringing the program to Lowndes, and she suggested that he contact Lowndes County Assistant Superintendent of Education Jason Burroughs.

Johnson, a local drummer and percussionists in Birmingham, who grew up in Montgomery and who has roots in Lowndes County, said he has a similar program in Birmingham. And he said when he learned that Dr. Burroughs wanted to bring Samba in the Streets to Alabama’s Black Belt, he told her about Jason Burroughs.

Yudin said Dance/USA, which administers Samba in the Streets is a national dance service organization that understands and is beginning to profoundly address the issue of inclusion and who does get to see dance.

She said, “We need to widen the field so that we start gaining audiences for stages and audiences for future presenters of the universe. “And she and Burroughs pointed out that to do that the children need to see it when they are in kindergarten and fifth grade and six and high schools and communities where they don’t otherwise get to see it.

Yudin said participants learn dance, song and rhythms from Bahia’s Black Consciousness Movement, which was “inspired by the ideologies and the activists here in Alabama and Lowndes County, Birmingham and Selma and Montgomery and how the Civil Rights movement here was dialoging about economic equity, racial equity, social equity.”

According to Viver Brasil, the residency honors Birmingham and Selma’s pivotal role in the American Civil Rights Movement, which subsequently inspired young Brazilians in Salvador, Bahia to address social injustice during Brazil’s military dictatorship (1964-1985) through rhythm, song and movement.

Yudin said, “Brazil was very different at the time… the human voice perhaps was being quelled, so the activist and artists began to look a new forms of music that were loud, that were big, that could get into the face of the white authority during the carnival period where huge Afro-Brazilian parading groups called blocos afro were expounding this history, meeting in public spaces and teaching hundreds of kids about Afro-Brazilian culture which was not being taught at all in the school system.”

She said it was only 18 years ago that in Brazil that a mandate was made that Afro-Brazilian history would even be taught in the public school system.

The transformative political eras of Birmingham and Salvador, Bahia occurred within a decade of each other (1960s-70s). During Brazil’s 1964-85 military dictatorship, blocos afro groups formed in Bahia’s black neighborhoods creating beautiful expressive acts through song and dance that affirmed and exalted their African heritage.

Young activists like Viver Brasil’s co-artistic director, Luiz Badaró, one of the 1970s innovators of blocos afro style movement, looked to America’s Civil Rights Movement, wherein Birmingham and Selma were in the forefront, as inspiration for resistance and expression.

“The Selma Bridge Crossing was a defining historical moment for many of us in Salvador, Bahia as we began to develop our own civil rights discourse,” said Badaró.

Yudin said, “Samba in the Streets offers an opportunity to develop and foster firsthand experiences with arts expression that articulate and explore the historical and cultural significance of the blocos afro to people in African-American communities in the United States. “

Yudin also said, “Samba in the Streets Alabama links and engages two distinct African diaspora audiences whose history and culture can be directly traced to west and southwest Africa.”

Samba in the Streets Alabama workshops are organized on the model set by Bahian blocos afro. 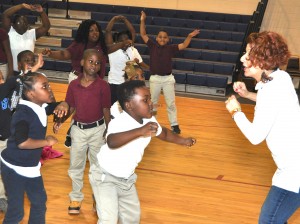 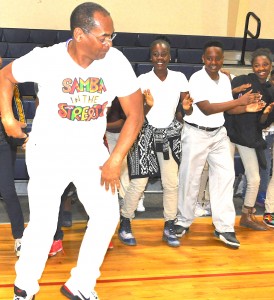