After more than 40 years in education, Darrell Self stepping down as headmaster at Lowndes Academy

Looking for more “me time” to spend with his grandchildren, after more than 45 years in education, including six years at Lowndes, Lowndes Academy Headmaster Darrell Self is stepping down on May 31. But he says he’ll be around to help whoever the new headmaster is.

Self started his career in education immediately following graduation from Troy State University at Hooper Academy in 1972. He said he started out as a business and history teacher and junior high football and basketball coach.

Self stayed at Hooper for about 35 years and was headmaster there from 1991-1997. He served as athletic director for the Alabama Independent School Association for two years and served at Morgan Academy for two years as dean of academics.

And after being semi-retired for about a year, Self came to Lowndes Academy as headmaster in 2012.

Self said he’s really enjoyed his years at Lowndes. He said he had “great support from the board, faculty and the parents. And the students have been good.”

However, he said, he’s now at the point that he wants to “try to do something else for a while and then work part-time.” He said he doesn’t know what he will do, but enjoys working with people. And he said he was in the antique business for a while.

Self said he’s got five grandchildren at Lowndes, who he wants to see, as well as their activities.

Self said, “I just want to thank the people of Lowndes and in the surrounding area for their support of me being at Lowndes and the help they have offered our school.” He said, “It’s been just tremendous.”

He stressed he will still be around the school with his grandchildren and helping in any way he can.

Some of things that have happened at Lowndes under Self’s tenure, he said, include increased enrollment and the growth of the school’s technology department. He said, “We have SMART Boards in every classroom, and we offer more courses for our kids, and more scholarship dollars have come as a result of these things. So, I’m really proud of the growth in that area for our school.”

Self said he’s not counting down the days to his retirement because he’s enjoyed it. He said his retirement has nothing to do with the school.  He said, “It’s a good situation, good community and kids.” However, he said, as headmaster you want to be at as many things as possible. But now he just wants some more “me time.” 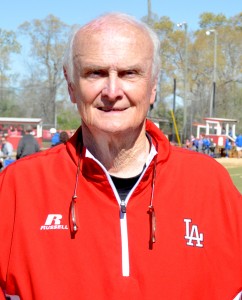 Samba in the Streets comes to Lowndes County School