A Massachusetts man, who has been invited to join in remembering the 50th anniversary of Dr. Martin Luther King, Jr.’s assassination, at the National Civil Rights Museum in Memphis, Tenn., began a walk from Selma to Memphis, via Montgomery and Birmingham on Sunday, Feb. 25 as part of a community partnership project. And he stopped at the Lowndes Interpretive Center in White Hall on the way.

“Throughout American history, especially African-American history, walking has punctuated major social-change events, but it didn’t improve our physical overall health,” said Ken Johnston, an amateur long-distance hiker from Amherst, Massachusetts. “To do that our communities must first be set up to encourage people to get out and walk.”

The walk connects the historic U.S. Civil Rights Trail from Selma to Montgomery, continues on to Birmingham tracing the Underground Railroad and concludes at the National Civil Rights Museum in Memphis.

Johnston told the Signal in a brief stop on his walk, Sunday, “I’ve worked behind the desk… a 9-to-5 type person the last 20 years of my life working with computers. And I just felt like there wasn’t enough life in me anymore. It was just being sucked out sitting at that desk.” He said his life “lacked movement.”

He said the idea behind the Walk to Freedom came him after Sen. Ted Kennedy died. He said people said how much Kennedy loved Massachusetts, and he decided he wanted to see what Kennedy saw. So, he said he drove to the furthest point of Massachusetts and just started walking. And after he reached the tip of Cape Cod, he wanted to keep going.

Johnston said he planned to walk from the Gulf Coast to Canada following the Underground Railroad. But he saw the National Civil Rights Center was having a 50th anniversary in Memphis so he decided to focus on that and could walk 400 miles instead of 1,500 miles.

He said when he sent his proposal to participate in the ‘Where Do We Go From Here?’ MLK50 Remembrance Ceremonies in Memphis and they accepted it, “I knew I had to do it”.

He said, “One of the things that struck me during this walk was that I saw very few people walking in the communities in which they live.”

He said that today many Americans live relatively sedentary lives. Walk to Freedom hopes to encourage the discussion of walking as a way for people to improve overall health through natural movement. Walk to Freedom will take 37 days and connect with people, places and history across 18 counties and 26 townships between Alabama, Mississippi, and Tennessee – the distance driving from Birmingham to Baton Rouge.

Johnston said he planned to begin from Selma right after church on Sunday Feb. 25, completing 100 miles a week to reach Memphis by April 2.

“I’m doing this walk to promote movement as part of everyday healthy living,” Johnston said, adding, “additionally, I see this journey as generating a series of questions and observations about the barriers that prevent people from enjoying the great outdoors. I look forward to sharing stories about my long-distance walking experience with civic groups and area schools during my walk and upon my return.”

Johnston can be reached directly by email at kjohnston16@yahoo.com 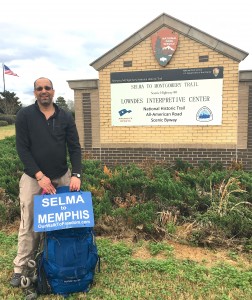 Ken Johnston, an amateur long-distance hiker from Amherst, Massachusetts takes a moment to take a selfie at the Lowndes Interpretive Center on a walk from Selma to Montgomery as part of a 400-mile mark to remember the assassination of Dr. Martin Luther King Jr. He began his walk at the Edmund Pettus Bridge in Selma, Sunday. (Submitted).