Lamar Hall stepped down as fire chief of the Burkville Volunteer Fire Department recently after more than 20 years of service in that capacity due to medical reasons.

He was recently recognized by the Lowndes County Association of Volunteer Fire Departments for more than 20 years of service and given lifetime volunteer firefighter status by Association President Rodney Rudolph.

Hall, who said he began his career as a volunteer firefighter because he “needed a fire department” for Burkville, said of serving, “It’s been rewarding because it’s people with big hearts that are helping people that they don’t even know in most cases. And that is giving one’s self. And how great of a reward would one want than to volunteer and serve his fellow man.”

Hall explained that he’s lost his ability walk and being able to respond to fire department calls.

He said he and the late Winston Pringle started the Burkville Volunteer Fire Department in about 1997 after the community had lost its third home in about two weeks to fire, and there was no fire department in the area. He said, “Those homes were just taken away from us.”

Hall said a community meeting was held at the Lowndes County Courthouse, and after getting 501c3 status, fund-raising efforts began. And, he said, he was appointed chief at that meeting.

Hall the department got a lot of help as other fire departments were willing to donate equipment. Their first truck, he said, was loaned to them by Fort Deposit, and the Burkville fire station was put up in pieces.

He said the first truck they owned came from the Dothan area and is now in use by the Calhoun Volunteer Fire Department.

Hall there were many volunteer firefighters, and Burkville now boats 23 volunteers on its roster. He said training is held every second and fourth Tuesday night of the month, which has been done since the beginning.

He said the new chief is Dustin Casey of Casey Feed on Lowndes County Road 37. 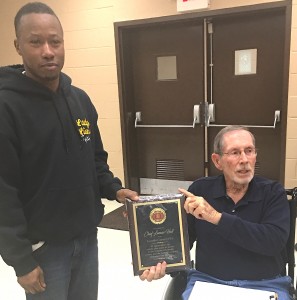