The farm and processing plant off U.S. Highway 31 in Logan was founded in 1923, and Bates House of Turkey Restaurant in Greenville was founded in 1970. And as late owner Willie C. “Bill” Bates Jr. always said, the business is known for quality and added value.

Today, the farm and all the cooking of the turkeys at the processing plant is operated by Bill Bates’ son, John Bates, and John’s son, Ben Bates.

The restaurant in Greenville is operated by Bill Bates’ daughter, Rebecca (Becky) Bates Sloane, while her daughter, Cheri Weekley, manages the office, sales and shipping from the processing plant in Lowndes County for the farm and the restaurant.

Ben and Cheri are grandchildren of the late Bill Bates, who started the tradition of providing turkeys to Alabama Governors going back to James E. “Big Jim” Folsom in 1949.

Each year the governor pardons Clyde the turkey and his girlfriend Henrietta.

According to Ben Bates, the farm raises 15,000 to 20,000 turkeys per year beginning in June. He said the processing of the latest flock actually began Wednesday, Nov. 8.

Cheri said as more companies and families are going to smoked turkeys, more are being smoked at the processing plant now than in the past. And she said the smoking of the turkeys actually began about two weeks ago so shipping could start on Nov. 7.

She said farm and processing plant supply turkeys for the restaurant in Greenville and the people who pickup turkeys there for the holidays, as well as to the farmer’s market in Montgomery and four or five Piggly Wiggly grocery stores in the Birmingham area.

She said the business has been working to make its shipping more user friendly for the older generation.

Cheri said the price of turkey has not gone up at Bates Turkey Farm, so, “We were able to keep our prices the same.”

“We’ve been pretty fortunate not to have to increase our prices,” Cheri said. “That’s good for us because it helps us retain our customer base that we have now.”

She said the business is also working to get ecommerce and corporate sales up.

Cheri said, “A lot of corporations and companies don’t gift their employees like they used to during the holidays.”

She said Bates Turkey Farm has supplied corporations with their gift turkeys since the 1970’s and that her late grandfather Bill Bates always did that.

Cheri said, “Most of the orders will start shipping out next week so that they have time to reach their destination.” She said those shipments will just go straight into the customers’ fridges and wait to be pulled out and cooked or just heated up for Thanksgiving.

Ben, who is responsible for raising the turkeys, said baby turkeys called “poults” actually arrive at the farm at one-day-old. He said processing begins for hens after at about 13 weeks and processing for toms begins at about 15 weeks.

Ben said toms go about 28 to 30 pounds while hens go from 18 to 22 pounds with processing beginning in October.

Cheri said the business sold about 20,000 turkeys last season. She said there are few losses at the farm and have been no problems with diseases such as has bird flu. And Ben concurred.

Cheri said the biggest problem is making sure that rainy days and hurricane weather doesn’t affect the turkeys.

She said the largest number of Bates shipments go to corporations and delivery customers during the holidays with more turkeys being shipped than used at the restaurant in Greenville.

Cheri said she’s noticed now days seasons jump straight from Halloween to Christmas, especially in the larger stories. She said, “The only stores you can see focusing on Thanksgiving are the smaller grocery stores, which specifically cater to families.” She said, “You can’t go into any other store and you don’t find anything Thanksgiving right now… everything is Christmas.”

However, she said Bates Turkey Farm is growing and she wants to help the business grow.

She said her grandfather never wanted to sellout. He enjoyed the business, which she said the family now enjoys.

“I think our favorite thing is actually hearing from our customers… how much they love our turkeys.”

She said when a turkey leaves the Bates processing plant it will never taste bad, be dry or be too salty, and customers don’t have to worry about injections or hormones or any of that.

“We were healthy before it was cool to have organic and healthy and free range,” Cheri said. “We like to think that we were on the forefront of that.” 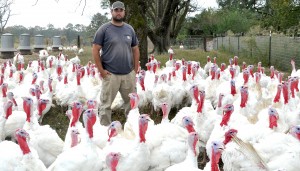 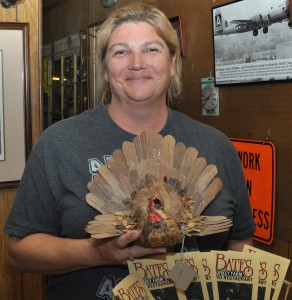 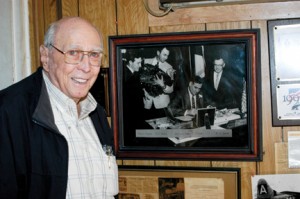