The Lowndes Academy Rebels opened the 2017 football season with a hard fought 19-12 non-region victory over the Southern Academy Cougars at home, Friday night.

Lowndes Academy head football coach Bob Taylor agreed the win wasn’t one of the Rebels’ prettiest, but said, “I knew what Southern was going to give us. I was expecting it all week. They got better from last week and did what they were supposed to do.”

He said of his own team, “We’ve got some work to do. We got a little banged up tonight. But I was expecting it. They (Southern) are a physical football team.”

Taylor referred to lost scoring opportunities by the Rebels saying, his team was hampered by “penalties, mental mistakes, missed blocking assignments.” He said, “Stuff we are not supposed to let happen, happened. We just didn’t do the little things right that we are supposed to do.”

Taylor acknowledged the win on the books for his Rebels, however, saying, “We came out with the win. We made some plays when we needed to at the end. We’ve just got a lot of work to do to get to where we want to get to.”

He noted the running and passing of quarterback Jon Johnson and receptions by wide receiver Zach Miller. He said running back Christian Barkley was taken away by the Southern defense, which “keyed on him all night.”

The game began with the flip of a special commemorative coin provided by W.D. Arthur. The coin was a “Special Agent, Special Inspector General Afghanistan Reconstruction coin given to Arthur by a friend, he said, is in Afghanistan as a special auditor.

Arthur said Afghanistan Reconstruction coins will be presented to the coin toss winner of each Lowndes Academy home game this season.

After a scoreless first quarter, the Rebels drew first blood when Johnson connected with Miller on a 15-yard touchdown pass at the 10:27 mark of the second quarter.

But Southern knotted the score at 6-6 with a 21-yard touchdown pass with just about 37 seconds before the end of the half.

Southern would stun the home team and take the lead 12-6 on a 2-yard run at the 6:43 mark of the third quarter.

But Johnson would answer for the Rebels with 10-yard touchdown run at the 3:00 mark of the third quarter. He would give Lowndes Academy the 13-12 lead with a point after touchdown kick.

Following a Ryan Davis interception of a Southern pass, Johnson iced the game away for the Rebels with a 10-yard touchdown run at the 1:34 mark of the fourth quarter to make it a 19-12 final.

For Lowndes Academy, Johnson completed 8 of 16 passes for 119 yards and one touchdown. He suffered one interception.

Dylan Weaver went one for two passing for the Rebels for three yards and suffered one interception.

Johnson led the Rebels in rushing with 17 carries for 89 yards and two touchdowns.

Leading receivers for the Rebels were Barkley with four catches for 63 yards, Miller with three catches for 43 yards and a touchdown and John Morgan with two catches for 16 yards.

While Lowndes threw two interceptions, Southern lost a fumble and threw one interception.

The Rebels will travel to Freeport High School in Freeport, Fla. this coming Friday, Sept. 1. 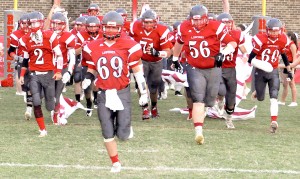 Injured Lions fall on the road 34-6