Free prostate screening held in Hayneville to help save lives 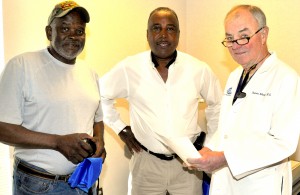 Dr. Thomas Moody of the Urology Health Foundation, right, who held a free prostate screening at the Lowndes County Health Department Saturday talks with participants from left Willie Arnold, fire chief for the Collirene Volunteer Fire Department, and Arthur Nelson, president of Lowndes County Friends of the Civil Rights Movement,  about the importance of getting one’s prostate checked. It is predicted that one in six men will get prostate cancer. Fred Guarino/Lowndes Signal.

Did you know that one in six men will have prostate cancer?

Because of that fact Dr. Thomas Moody has been coming to Lowndes County for years to screen men for the disease. And Saturday, he conducted a free screening at the Lowndes County Health Department in Hayneville.

Moody is president of Urology Health Foundation, a non-profit organization in Birmingham. He said about 10 years ago, they realized that the death rate from prostate cancer in Alabama was too high… third highest in the nation. “And,” he said, “among African-Americans men, we (Alabama) was the highest in the nation.”

He said after 10 years of screenings, “I am happy to say that the death rate in Alabama from prostate cancer has gone down among white men and black men and among African-American men even at a higher rate.”

Willie Arnold, fire chief for the Collirene Volunteer Fire Department, who also participated, said, he happened to hear about the screening at a Lowndes County Commission meeting about four or five years ago and that he has been coming to be screened every year.

He said, “It is very important. In my family, we don’t have any history of it, but you just never know.”