Davis previously served as mayor prior to the election of outgoing Mayor James Walker. And prior to winning election as mayor  in August, Davis was appointed by the council to serve out the term of Council member Glenn Mallard, who resigned his seat.

Seaborn announced Thursday  that the incoming mayor and council will hold an organizational meeting on Monday, Nov. 7 at 7 p.m. and said that the meeting will be posted as the council normally meets the first Thursday of each month.

Thursday night  the council heard from Catherine Coleman Flowers of the Alabama Center for Rural Enterprise, who congratulated the incoming mayor council on taking their oath of office and announced a Lowndes County On-Site Wastewater Design Challenge to be held at the Jackson-Steele Community Center on Saturday.

She said from 9 a.m. until 5 p.m. Saturday, people from around the nation will see if they can design something that works in Lowndes County that would affordable to the average person and which could be used across the nation. And Sunday from 9 a.m. until 12 noon, she said, there will be discussion of technological solutions also at Jackson-Steele Community Center.

Davis thanked  Hulett for his participation Thursday. She also thanked all the citizens of White Hall for their support.

Davis said, “I just want the people of White Hall to know that your mayor… after Monday I will be your mayor… (and) your council persons are going to work together. And we need, as Ms. Rudolph has said, our citizens to work with us so that we can move White Hall forward. Working together we can do that.”

Davis concluded, “So, we are going to stand and work together and get White Hall back on track.”

Refreshments were provided for those in attendance Thursday night by Council members Rudolph and Baker. 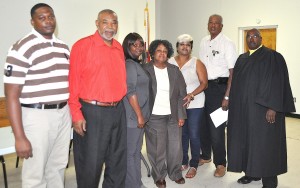 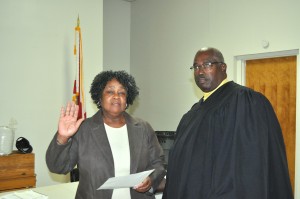 Special to the Signal An additional 18 Alabama counties, including Lowndes, have been placed under drought emergency level in the... read more