In clash of Rebels, Lowndes Academy gets second win 43-6 over Coosa Valley Academy

By Fred Guarino
The Lowndes Signal
It wasn’t pretty, according to head football coach Bob Taylor, but his Lowndes Academy Rebels got their second victory of the season at home Friday night, 43-6 over the visiting Coosa Valley Academy Rebels.
And both fans and the home team heard words of thanks and motivation from the mother of critically injured Lowndes Academy football player Trevor Johnson.
Sonya Johnson, mother of Trevor, addressed the crowd at the half to tell them how much their prayers and those from all Alabama Independent Association Schools (AISA) and support meant to Trevor’s recovery. She also joined the Lowndes Academy Rebels on the field.
Johnson was critically injured in a vehicle accident that saw three other Rebels injured prior to the Macon-East game, which was ultimately cancelled.
Sonya Johnson said Trevor has come far in 15 days. She said he went “from not knowing if he was going to be here to being a walking testimony for God.” And she quoted Trevor on Friday saying, “Go Rebels.”
She also quoted him from the night before game saying, “Defense, Defense, Defense.”
Sonya Johnson told the crowd that Trevor has been taken into the “family of Lowndes,” and she said, “He’s going to be okay.”
While the Lowndes Academy Rebels downed the Coosa Valley Academy Rebels handily 43-6, Taylor said, “I thought we were sloppy.”
He said, “Coosa Valley played a great ball game. They did some things to us that we were not expecting… I felt like they out played us.”
Still, the home standing Rebels produced 381 total yards of offense to 70 total yards for the visitors.
The home Rebels had 122 yards passing to 54 for the visitors, had 259 yards rushing to 16 yards for the visitors and made 20 first downs to seven for the visitors.
About the only negative was that Lowndes Academy turned the ball over twice on fumbles, one which went for 45 yards for a touchdown for the visitors. And while Lowndes scored on big plays, the visiting Rebels put up a tough defensive effort.
But then the visitors turned the ball over three times on fumbles.
Against Coosa Valley Academy, on offense:
Jon Johnson completed six of 11 passes for 122 yards and a touchdown.
Brandon Reid rushed 14 times for 63 yards and one touchdown; Johnson rushed 15 times for 45 yards and three touchdowns; Ninth grader Gus Page rushed three times for 34 yards and a touchdown; and ninth grader John Morgan rushed nine times for 83 yards.
John Taylor caught a 56-yard pass for a touchdown, kicked a 21-yard field goal and added four points after touchdown.
On defense against Coosa Valley Academy:
Daniel Callaway had four tackles, three assists and two tackles for loss; Jackson Patton had four tackles and two fumble recoveries; Cole Crook had three tackles, two assists and one fumble recover; and Jimbo Wheeler had three tackles, one assist and two tackles for loss.
The home team struck first when Taylor caught a 56-yard pass from Johnson and added the point after to take a 7-0 lead at the 11:42 mark of the first quarter.
The home team would not score again until the 9:27 mark of the second quarter when Brandon Reid ran for a 2-yard score to put the Lowndes Academy Rebels up 13-0.
And to the shock of the home crowd, Coosa Valley Academy got on the board when a visiting Rebel, T. Temple, returned a Lowndes fumble 45 yards for a touchdown at the 5:03 mark of the second quarter to make it a 13-6 ball game.
But home Rebels answered when Johnson scored on an 11-yard run to put Lowndes Academy up 19-6 with 4:04 left in the half.
Lowndes’ Taylor kicked a 21-yard field goal at the 1:54 mark of the second quarter to make it a 22-6 lead for the home team.
And with about 16 second left in the half, Johnson scored on a 2-yard run. Taylor added the point after, and Lowndes Academy led 29-6.
Johnson would score a touchdown with a 10-yard run at the 8:27 mark of the third quarter. And Taylor would add the point after to put the home Rebels up 36-6.
Page would score the final touchdown of the night on a 16-yard run at the 7:12 mark of the fourth quarter. And Taylor would add the point after to put the home Rebels up for the final count of 43-6.
Following the clash of Rebels, Taylor said, “We’ve got to go back to work this week. We’ve got a big regional game next week.” He was referring to the upcoming game this Friday on the road at Crenshaw Christian Academy in Luverne. 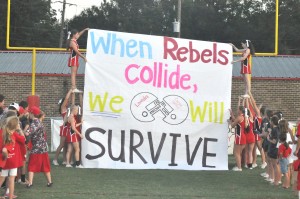 Sonya Johnson, mother of Trevor Johnson, addressed the crowd at the Rebels home game against Coosa Valley Academy Friday night to tell them how much their prayers and support mean to Trevor’s recovery. He was critically injured in a vehicle accident that also saw three other Rebels injured prior to the Macon-East game, which was ultimately cancelled. She said he has come far in 15 days. She said he went “from not knowing if he was going to be here to being a walking testimony for God.” And she expressed thanks to all schools of the AISA for praying for him. Fred Guarino/Lowndes Signal. 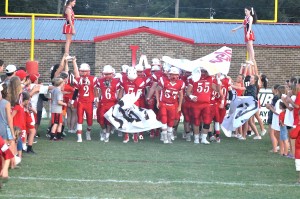 The Lowndes Academy Rebels walk through a banner showing them to be a united team. Fred Guarino/Lowndes Signal. 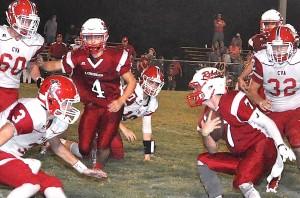 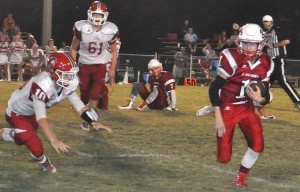 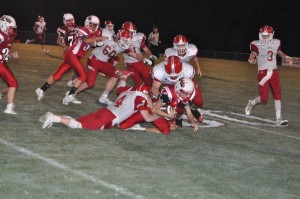 Gus Page, another Lowndes Academy ninth grader, gets taken down by Coosa Valley Academy. But he would score Friday night for the home Rebels on a 16-yard run. Fred Guarino/Lowndes Signal.