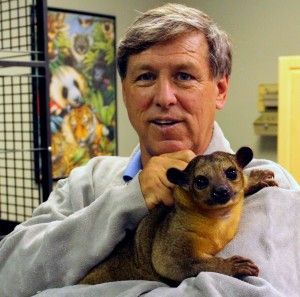 Lowndes County’s Dr. Harold Pate, DVM, has been installed as the 2017 president of the Alabama Veterinary Medical Association. Pate, who practices in Lowndes County and at the Montgomery Zoo, is pictured with Oso, a kinkajou, a Montgomery Zoo education animal. According to nationalgeographic.com, resembling a small primate, but actually related to the raccoon, the Central and South American kinkajou uses its long tongue to remove honey from beehives and nectar from flowers. Submitted photo.

Dr. Harold Pate Jr., DVM of Lowndesboro, has been installed as 2017 president of the Alabama Veterinary Medical Association (ALVMA).

Pate, who practices in Lowndesboro and at the Montgomery Zoo was installed at the Association’s annual conference at Sandestin Golf and Beach  Resort June 1-5, in conjunction with the Georgia Veterinary Medical Association.  The new ALVMA officers were installed at the ALVMA awards luncheon on June 2.

The conference, known as the Emerald Coast Veterinary Conference, was attended by veterinarians from over 38 states.

According to the Association, the ALVMA seeks to raise public awareness about general pet healthcare and focuses on the ways preventive care can be cost-effective and increase the length and quality of the life of pets. Additionally, there are topics like disaster preparedness, dog bite prevention and poison prevention that the ALVMA promotes throughout the year.

The ALVMA encourages pet owners to stay current on vaccinations and heartworm preventative.

Pate said, “It is a huge honor to be selected to represent the state as state president. I look forward to service in that capacity.”

Pate attended the Auburn University College of Veterinary Medicine, where he graduated in 1979, and has been practicing veterinary medicine for 37 years.

He has practiced in Lowndes County for 33 years of his career. He is a member of the American Association of Zoo Veterinarians who has general practice with an exotic practice at the zoo where he has worked for 27 years.

He explained that he does all the veterinary care for 465 animals at the zoo where he spends about 20 hours a week. He said the rest of the time is spent in his practice in Hayneville.

Pate said in Hayneville his practice is a mixed animal practice where he sees dogs and cats, horses and cows. In other words, he said he sees a lot of “farm animals and companion animals.”

Pate said he grew up in Lowndes County on a farm and developed an interest in aminals and their welfare, which grew into a desire to become a veterinarian.

He is also a 1972 graduate of Lowndes Academy.

According to the ALVMA, in addition to traditional healthcare, the field of veterinary medicine is expanding through new and progressive services and treatments including cancer, diabetes and various types of laser treatments and surgeries. And regular visits with animals to the veterinarian will increase the chances of preventing certain diseases and identifying underlying disease early. Many times veterinarians can detect conditions that would otherwise go unnoticed.

The ALVMA is the oldest and largest professional veterinary association in the state of Alabama and is nationally recognized as one of the most active.

Pate and his wife, Mary, make their home in Lowndesboro.