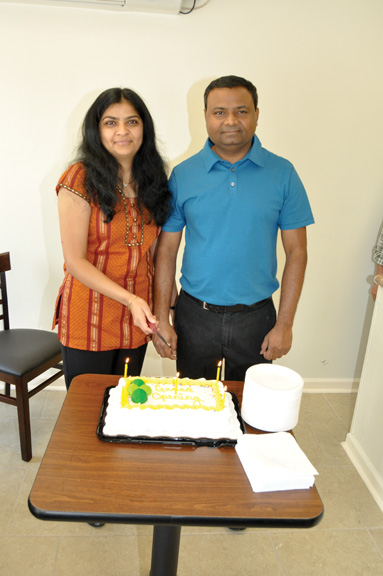 Asmita and Yah Patel, of Lowndesboro, served cake to guests to mark the grand opening of their Champs Chicken franchise in Lowndesboro last Monday.

Representing jobs and expanding business, Lowndes County welcomed a new restaurant on Monday, with the grand opening of Champs Chicken at the intersection of U.S. Highway 80 and Alabama Highway 97 in Lowndesboro.

“This is real good,” said Lowndes County Commission Chairman Robert Harris. “It helps the economy out here in the county. It’s a good tax base-type revenue. It creates jobs.”

Harris encouraged support of local businesses. “We’ve got to support locally first because all the money that is made in Lowndes County, we can turn around and spend back in Lowndes County to create more jobs and more revenue,” he said.

Asmita and Yash Patel, of Lowndesboro, who own the BP Station where it is located, own the new fried chicken restaurant as well.

“I think it is wonderful what they are doing,” said Helenor Bell, former mayor of Hayneville, who attended the ribbon cutting ceremony with her husband Karl. “It’s bringing growth to Lowndesboro. Lowndesboro has always been a friend to Hayneville,” she said.

“So we are here to lend our support to the Patels and also to (Lowndesboro) Mayor (Rick) Pate because Lowndesboro has always been great friends of ours,” Bell said.

“I think this is great for the community,” Pate said. “I feel like Yash (Patel) found a need in the community.”

Pate said the addition of another restaurant in Lowndesboro was capitalism at its best. “People saw a need and an opportunity for them to provide a service and generate a little sale tax,” he said.

Yash Patel said he was happy with everybody and would like to do more business. “I appreciate people giving me the chance open this (restaurant),” he said. Asmita Patel said Champs Chicken is a good franchise and that she had heard of their good chicken.