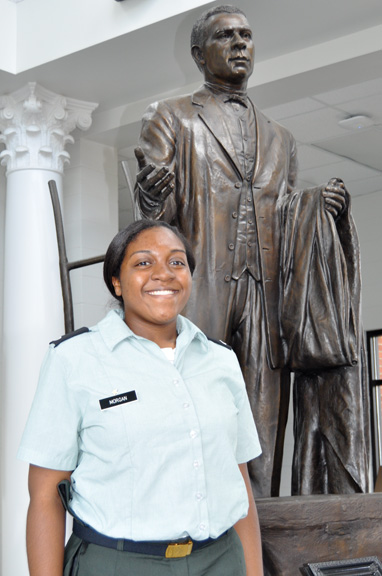 The senior, who plans to attend the University of Alabama in Tuscaloosa, learned Friday that she was one of only 1,000 out of 54,000 students selected who applied for the Gates Millennium Scholars Program for 2013.

The program is funded by the Bill & Melinda Gates Foundation.

“So, basically, the student who has the grades, who has, of course, the GPA (grade point average) can pretty much go to the school where they are accepted for that 10 year period,” he said.

“We are very excited for you to join the community of Gates Scholars. And we are very pleased to confer this distinct honor that distinguishes you as a leader for America’s future,” Larry A. Griffith, vice president, UNCF Gates Millennium Scholars Program, wrote Morgan in a letter.

“As a Gates Millennium Scholar, GMS funds are available for you to attend any U.S. located, accredited college or university of your choice. This is a renewable scholarship based on the GMS Program guidelines.”

Griffith wrote that Morgan was a part of the largest, most competitive group of candidates in the program’s history.

“This young lady has worked very hard to submit all of the paper work in a timely manner and has done everything I asked of her from her nomination to this point,” Calhoun School Guidance Counselor Curtis Jackson said.

Morgan, who is in the Calhoun School U.S. Army ROTC Program, said she has a 3.9 grade point average and plans to attend the University of Alabama to pursue a medical career as an OBGYN.

To earn the scholarship, she said she had to write eight essays on subjects such as her academic strengths and weaknesses, her leadership roles in the community and church as well as her talent outside of school.

When asked, she said her favorite subject is math and that she writes poetry.

“It’s good that I won’t have to worry about paying for college for all those 10 years,” Morgan said of the scholarship.

But why become an OBGYN?

“It’s a growing field and I like dealing with people and little children,” Morgan said. “I want to help women gain a perfect health, like in my community, the people who don’t have good prenatal health care.”

According to Griffith, Morgan will have to submit documents throughout her undergraduate career to guide GMS’ review and determination of a new scholarship amount for each year she is eligible.

She is the daughter of Pearlie and Freeman Morgan.