By Michael Rodgers
The Lowndes Signal

A racist and inflammatory flier that began circulating around Lowndes County last week has both citizens and county officials denying involvement.

The flier is entitled “The Fiery Cross Ballot,” and contains the logo of the Loyal White Knights of the Ku Klux Klan.

In the flier, the “n”-word is used three times, along with a number of other racial slurs.

Barbara Evans, a community activist who was named in the flier as an “Imperial Commander” of the Klan, held a press conference along with McAlpine on Monday to deny any involvement with the flier and issue a statement.

“I think this flier is a hate crime against me, and against Carnell McAlpine, and against Lowndes County,” said Evans, who read a prepared statement at the press conference.

Evans also said she had proof that current Lowndes County Commission Chairman Charlie King Jr. was a “major distributor” of the flier.

King, who was defeated by McAlpine in Tuesday’s runoff election for the District 2 County Commission seat, called the situation “despicable” and “unreal.”

King also denied being involved in the distribution of the flier, but surveillance tape from a local gas station that shows King placing fliers on the station’s counter came to light on Monday.

King said that he was only placing the fliers there to inform the community and re-affirmed that he didn’t write it.

“I didn’t have anything to do with writing it,” he said. “When I woke up Friday morning, fliers were plastered all across the windshield of my truck.”

King said he had been harassed in the past, including an incident where he said his house was burned, and this time he decided to inform the public.

“I wanted to let people know what was going on,” he said. “I’ve been through this before. There was some paperwork before, and I just ignored it.”

Evans’s website and community newsletter, Esther’s Trumpet, featured a post last Friday that named both King and Gene Crum, head of the county’s Economic Development office, as being behind the flier.

Crum, who said he was “shocked” at the whole series of events, also denied involvement.

“I was not aware that I was implicated with any part of the design or distribution of such a vicious letter in any shape, form or fashion,” he said.

Crum said that he feels that such an event makes it difficult to recruit jobs and industry to the county, and for the community to prosper.

“I care about this community and want to see it grow in a positive way,” he said. “You should not be allowed to put individual’s name out in a way with such malicious and reckless disregard.”

Both McAlpine and Johnson, who were endorsed on the flier, said they were not involved in its publication.

Johnson, who won re-election as District Court Judge over Debra “Caldwell” Bush, said he would not speculate on the origin of the flier.

“All I can say is I know that I, and nobody in my campaign, supports this,” he said.

McAlpine said he felt personally insulted by the flier.

“I was somewhat hurt when I saw it, to think that somebody would put something together like that and put that kind of weight on my shoulders,” he said.

Chris Barker, the Imperial Wizard of the Loyal White Knights of the Ku Klux Klan, said that Evans was not a member of his organization and that “Imperial Commander” was an outdated title used by a women’s auxiliary of the Klan called the Ladies of the Invisible Empire.

The national office for the Loyal White Knights is located in North Carolina, and Barker said that while there are members in Alabama, his group has certain fliers approved for distribution.

“The Fiery Cross Ballot” is not one of them, he said.

“I sent them some fliers, but that’s not one of them,” he said. “Most of our members pass out approved fliers, but it has to come through me first.”

Because of the flier, Evans also said she is concerned for her personal safety.

“Anybody who knows me knows I didn’t write it, but what about those ones that don’t know me?” she said.

Evans said Lowndes County Sheriff John Williams called the issue a civil matter, and though she contacted the Alabama Bureau of Investigation, they would not address the case without a local referral.

Both Evans and King are calling for an investigation from the Attorney General. 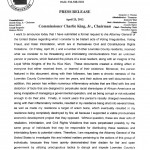 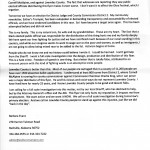 Darrell W. Self will begin duties as the new headmaster of Lowndes Academy on June 1 and Chuck Insinga, former... read more