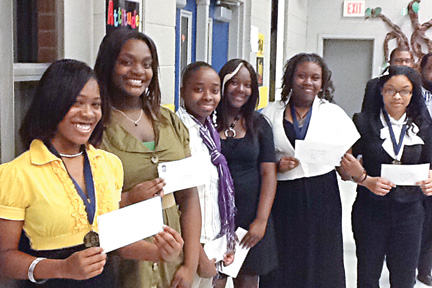 Want to know if store brand or name brand water is best to drink? Ask the students of The Calhoun School.

LaShannon Axel, Quintosha Robison, Machara McCall, LaKendra McMeans, Michelle Scott and Adrianne Taylor won first place in the Chemistry and Biochemistry category for The Calhoun School and will advance to the state science fair to be held April 5-7.

Calhoun supervising teacher Rochelle Williams said the students from the Calhoun School won for their project “Which Water is Best?” and will compete with an online entry in April as well as a result of their U.S. Stockholm Junior Water Prize win.

“The purpose of this experiment was to determine if name brand water (Dasani, Aquafina or Nestle) is more purified than store brand water,” Williams said.

In the experiment, Williams said, students added silver nitrate to a sample of bottled water to determine if chloride was present.

“If the water sample forms a precipitate that indicates that chloride is present,” Williams said.

“Many of the bottled waters had the presence of chloride in them, which is said to cause cancer and infertility in males,” Williams said. “The purified brands were found to be the best choice of water to drink.”

Students from Calhoun High were also supervised by and Lester Turk.

Phi Beta Sigma presented awards to local science fair winners at the March 8 meeting of the Lowndes County Board of Education held at Jackson-Steele Elementary School in White Hall.

Williams said the Phi beta Sigma Fraternity presented $120 to the Calhoun School team ($20 each); $50 to Central High and $50 to Hayneville Middle School.

“I would like to congratulate LaShannon Axel, Machara McCall, Michelle Scott, Adrianne Taylor, Quintosha Robinson, and LaKendra McMeans for their achievement in winning the Local and Regional Science Fair for 2012,” said Williams. “ These ladies have done an outstanding job representing our school The Calhoun High and Lowndes County School System. By competing in the Science Fair in Lowndes County and at Auburn University, it shows what great students and individuals we are producing in this system.”

Williams added, “In April, these ladies will represent Calhoun and Lowndes County at the state level Alabama Science and Engineering Fair at the University of Alabama in Huntsville. It is my wish that they will win this competition also.”

‘In the Footprint of Creeks’ lecture series continues Thursday

Special to the Signal “In the Footprints of the Creeks,” Presentations Commemorating the Creek War and War of 1812 will continue... read more