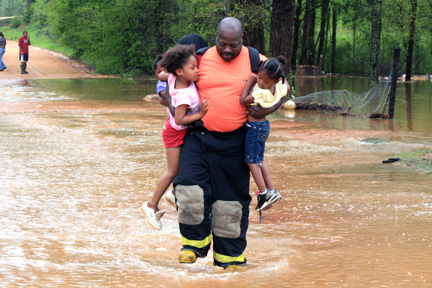 “Fire-Rescue personnel from the Fort Deposit Fire Department responded to the flooded community and assisted in the coordinated rescue effort for the residents who were trapped in their mobile home,” Hill said.

He said he and Fort Deposit Fire Personnel were “able to safely evacuate the homes and all of the residents which included three little girls and their mother, grandmother, grandfather and their uncle.”

He also said there were others who were able to reach safety without the aide of first responders given that they evacuated before the rising water kept them from being able to do so on their own.

“In spite of the enormous amount of rainfall which left residents stranded in their homes, I am thankful to God that no one was injured as a result of the flooding,” Hill said. “ I commend the Fort Deposit Fire-Rescue for their dedicated work and untiring efforts provided in the rescue efforts.”

Hill said Lowndes County Sheriff John Williams, along with Butler County Sheriff Kenny Harden and a deputy from Butler County, and Fort Deposit Police Chief Brandon Thomas arrived on the scene shortly after the residents were safely rescued from their homes.

He said Butler County Fire-Rescue offered assistance also and were on stand-by awaiting to be deployed to the impacted area along with the Montgomery Water Rescue Taskforce.

According to the Lowndes County Emergency Operation Center, approximately four vehicles were completed destroyed on properties impacted by the flooding, and none of the residents in the impacted area had flood insurance.

Hill said County Engineer David Butts had a crew temporarily repair the eroded road which was severely damaged and made for hazardous driving.

He said the crew is scheduled to return and study ways to improve the road conditions from possible future water damage.

The National Weather Service in Birmingham reported a flash flood in Fort Deposit on Friday. According to the report, Highway... read more