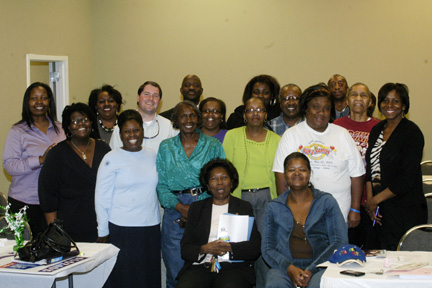 Lowndes County Relay for Life captains met Monday, March 5 to register teams, make plans and get updates for this year's event to be held Friday, April 20 at the baseball complex in Hayneville from 6 p.m. until 1 a.m.

This year’s goal for the Lowndes County American Cancer Society Relay for Life is $35,000, and the theme is “Carnival for a Cure.”

The annual Relay for Life will be held Friday, April 20 at the Russell baseball complex in Hayneville from 6 p.m. until 1 a.m. And, as of Monday, March 5, Lowndes County has 15 teams signed up.

So, she said, team captains decided that $25,000 was reasonable.

“But at the end of Relay Night, we had over $33,000,” she said. “So they well exceeded not only their own personal goals, but also the goal the American Cancer Society had for them.”

Mills said the majority of the goal is to help people fight cancer through prevention programs such as mammograms, a Hope Lodge and research.

Some of the dollars go to help with transportation grants for gas and for patients to stay free at Hope Lodge.

She also said checks are not written to individuals but are made instead to organizations that provide those services.

The deadline for luminaria sales is April 10.

According to 2011 information provided by Mills there were 56 cased of cancer in Lowndes County including 10 lung, seven breast, nine colorectal and eight prostate.