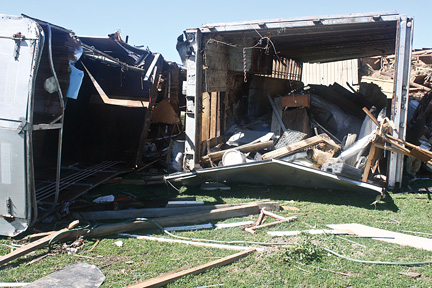 A mobile home was overturned and damaged by Friday’s storms.

About $500,000 in damages to property resulted from what the National Weather Service Birmingham Office confirmed was an EF1 tornado that touched down in Lowndes County on Friday evening, said Lowndes County Emergency Management Agency Director Walter Hill.

He recently reported on the damages that covered a 17-mile area.

“The tornado warnings were issued specifically for the communities of Mt. Willing/Braggs, Gordonville and Mosses, U.S. Highway 21 encompassing the Beechwood community and Braggs community,” Hill said.

“The greatest amount of damage was confined to U.S. Highway 21 South, just south of the city of Hayneville,” Hill said. “All of the warning sirens in the County were activated and each of our county’s fire/rescue departments were prepared to effectively respond at a moments notice.”

The EF1 tornado, which consisted of wind speeds of 110 mph, traveled a distance of 17 miles, leaving in its wake major to moderate damage along County Roads 33, 37, 26 and U.S. Highway 21, according to National Weather Service Birmingham storm survey damage officials who surveyed the damages in Lowndes County over the weekend, Hill said.

Among the some $200,000 in damage left in the aftermath of the tornado were several structures on property along U.S. Highway 21 South, Hill said.

A home had a large portion of its roof ripped from its structure and several barns and storage buildings were leveled along with many other structural damages and several horses seriously injured.

Hill said the Greater Mount Olive A.M.E. Church received major damage to its church structure when its huge stained glass, which faced the front side of the church, was completed blown from the building structure into the church, causing the heavy rainfall to flood the entire church sanctuary. He said cost of damage is estimated to be up to $20,000. The high winds also cause major roof damage to the church.

A mobile home on Mims Road was lifted from its foundation and overturned, but no one was inside the home at the time, Hill reported.

He said several trees were uprooted and thrown into the main road of U.S. Highway 21 just outside the Braggs community.

He said none of the accidents responded to resulted in injuries.

“In spite of the extensive damages, I am sincerely thankful to the Almighty that no one was injured and no lives were lost, Hill said. “The dedicated men and women of our first responding department did a phenomenal job and I am always appreciative for the hard work and dedication to serving and protecting the citizens of Lowndes County in a professional manner.”

SPECIAL TO THE SIGNAL Auburn University and A2D Inc., in partnership with Trillion Communications, completed its first phase of the... read more