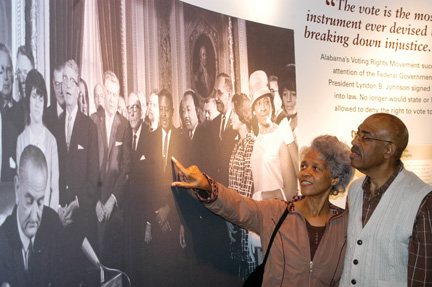 Dr. William Abernathy Jr. and his wife, Carletta, point out a photo of his uncle, Ralph David Abernathy, standing next to Dr. Martin Luther King Jr. on the day President Lyndon B. Johnson signed the Voting Rights Act of 1965 into law. The Montgomery couple toured the Lowndes Interpretive Center in White Hall on Monday to mark the birthday of the late Dr. King, leader of the Civil Rights movement.

“To remember him and what he stood for, what many people stood for…”
Those were the words of Dr. William Abernathy Jr., who was among those who visited the Lowndes Interpretive Center in White Hall on Monday to mark the birthday of the late Civil Rights leader Dr. Martin Luther King, Jr.

Dr. Abernathy, a retired Montgomery physician who toured the center along with his wife, Carletta, said he is the nephew of the late Ralph David Abernathy, who was Dr. King’s chief aide and closest associate during the Civil Rights movement of the 1950s and 1960s.

Abernathy and King organized a boycott of the Montgomery bus system and later founded the Southern Christian Leadership Conference together, according to Biography.com.

Abernathy continued as King’s chief aide and closest adviser until King’s assassination in 1968, after which Abernathy succeeded King as president of the SCLC.

“Because it’s Dr. King’s birthday, we wanted to do one activity significant of his life,” said Dr. Abernathy.

He said the third Monday in January is a federal holiday to mark Dr. King’s birthday, “But it’s not just a day of relaxation but to remember what… the freedoms that we have now that a price was paid.”
Dr. Abernathy and his wife stopped at one point on a tour of the center to indicate a photo of his uncle standing next to Dr. King as President Lyndon B. Johnson signed the Voting Rights Act of 1965 into law.

When asked what he thought of the Lowndes Interpretive Center, Dr. Abernathy said, “I think it’s excellent. We must have documentation of our past. People need to know from where we’ve come. And it’s significant that we have to document and we have to remember what price was paid for the freedom of voting that we have now, that it didn’t come just because someone gave it to us… people died. Black and white suffered and sacrificed so that we have this privilege.”

American Apparel expects around 75 employees to move to Selma

By Fred Guarino The Lowndes Signal About half the employees of American Apparel Inc.’s Fort Deposit plant will be employed... read more