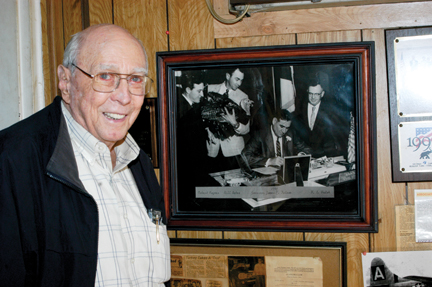 An 89-year-old family business, Bates Turkey Farm off U.S. 31 in Fort Deposit (founded in 1923) and Bates House of Turkey Restaurant off Interstate 65 in Greenville (founded in 1970) are known not only for the quality of their products, but also for being committed to changing with the times to add value.

“Everything we do is geared to the gift business. We’re what you called value added,” said Willie C. “Bill” Bates Jr., owner of Bates Turkey Farm. “We take a raw product and value add. You know we bone them out, cut them up, smoke them and sell them that way.”

Bates said his mother and father, Helen and Willie Claude Bates Sr., got married on New Year’s Eve in 1922. His great-aunt Mamie Bates had the farm next door. She gave his parents a setting of eggs.

“Nine eggs is what fits under a chicken hen,” he explained.

He said, “If you weren’t fixed for them, turkeys are bad about breaking eggs… big and clumsy.”

He also said turkeys want to be out in the wild away from everything.

He said his mother would dress the turkeys and, “It got to be a good source of extra income” when he was going to Lowndes County High School.

Bates went to Auburn University in May of 1941. He left Auburn in October of 1942 and joined the Air Corps returning home in February of 1946.

He said the interstate opened in about 1970 and traffic left the area of their farm, which was raising 2,000 to 4,000 head of turkey at the time.

“We needed a retail shop,” he said. When he couldn’t find a place at the Fort Deposit exit, he said he went to Greenville where they opened Bates House of Turkey Restaurant.

In the beginning along with the restaurant, Bates Turkey Farm was selling turkeys to grocery stores and chain stores.

However he said, “We changed our business completely. Now it is mail order and restaurant and retail and we sell turkeys through the curb market in Montgomery.”

The restaurant, owned by his wife, Teresa, uses only select turkeys from their turkey farm and serves up home cooked fresh vegetables and old-fashioned roast turkey dinners, said Bates.

In 1972, he said they started raising free-range turkeys. He said when the turkeys are seven weeks old they take them out of the house and put them under pecan groves.

Another tradition with Bates Turkey Farm is providing turkeys to Alabama Governors going back to James E. “Big Jim” Folsom in 1949.

“Every governor of Alabama every year gets a turkey,” he said. “We missed one year of the governor… that was Governor Lurleen B. Wallace… the lieutenant governor took her place at the time. She had cancer.”

The price of corn has affected turkey production for the Bates family.

“The most we ever paid for corn was $3 a bushel, and last year started out at $7.50,” said Bates, who added that it takes about 70 pounds per turkey.

He said at their peak they were wholesaling 120,000 turkeys a year, but before the recession, due to the price of corn and government regulation, they were down to about 40,000 turkeys.

“Food prices are up higher than they were last year and they are going to be higher next year. They are going to keep going because we’ve got a bunch in Washington… that see fit to cater to Iowa corn farmers… to make ethanol,” he said.

“We have to meet the same criteria where we dress 2,000 turkeys a day and my competitor over — nearest is in North Carolina — and they dress 200,000. Small businesses just cannot fit into today’s scheme of things,” he said.

But Bates said his motto is “value added product.”

“We found out one thing,” he stressed. “The reason we we’re selling everything… People don’t have as many dollars to spend, but when they spend a dollar they want quality… that’s what kept us in business all these years was quality.”

“They know the turkey hasn’t ridden all over the county. And they know that we’ve got our name on it. We’re going to stand behind it. And we know that we’re doing the best we can,” Bates said.

Bates said the turkey business is always changing, “But if you don’t leave yourself open to change, you’ll die by the wayside.”