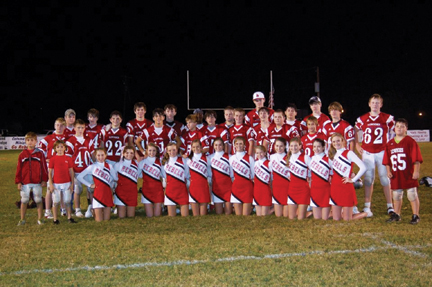 The Lowndes Academy Junior Varsity Football team had a successful football season in 2011 by posting an impressive 7-1 record on the year.

The Rebels started their journey in the weight room during the summer where the team worked hard to prepare for the season. That same hard work carried over into preseason practice. As the first game neared, the players chose the three captains for the 2011 season, Cody Harrell, Hunter Johnson and Thomas Ward.

The Rebels started out strong with a solid win in their first game against Autauga Academy, but found their second foe a little more challenging, 2A football powerhouse Edgewood Academy. This was a hard fought game by both sides, however, the Rebels would come up short by turning the ball over on downs on Edgewood’s 20-yard line with 1:00 left in the game. This would be the Rebels first and only loss of the season.

The Rebels had many quality wins on the year, with almost all of them being against schools that were in a larger division than the Rebels. Many came late in the season when the team was plagued by injuries to some older, key players. This allowed many younger players to step in the spotlight and make contributions to the team.

One of the key wins came against Lowndes’ long-time rival Hooper Academy. The Colts were also having a great season when the two teams met and the game was showcased to be an epic battle. The two teams traded possessions throughout the first half but the Rebels scored first and then a second time late in the second quarter to take the lead 14-0 at the half.

The Rebels defense was stellar on the night. The defense played that night like the saying goes “bend but do not break”. The Rebels forced a couple of key turnovers inside their own 20-yard line, which were key factors in the game. The Rebels ended the game by posting a shutout with a 20-0 victory over their rivals.

Another key game for the team came against neighboring school Fort Dale Academy in the last game of the season. The game was poised to be a battle between the two teams but the Rebels ended that talk early in the game and went on to trounce the Eagles 40-6.

The Rebels had many players with notable statistics on the year. On the offensive side of the ball the Rebels were able to run the football efficiently in every football game and a young and strong offensive line that controlled the trenches in every ballgame anchored this rushing attack.

Hunter Johnson was the leading rusher for the team with 960 yards on 98 carries and 12 rushing touchdowns. Johnson also had 15 catches for 211 yards and four touchdowns.

Cody Harrell was the second leading rusher with 341 yards and five touchdowns while Thomas Ward followed closely behind with 285 yards rushing and five rushing touchdowns.

Calvinar Thomas also added to the Rebels rushing attack with 164 yards on 17 carries and a touchdown.

The Rebels quarterback, Cody Harrell, was 50 for 81 on the season for 684 yards and four touchdowns.

David Hussey led the Rebels in receiving with 21 catches for 323 yards and Michael Scribner followed with seven catches for 129 yards.

On the defensive side of the ball the Rebels were relentless, only giving up an average of 8 points a game. Thomas Ward led the team in tackles with 42 on the year. Hunter Johnson added 32 tackles and Cody Harrell was close behind him with 30 on the year. Owen Nall, who missed the last three games of the year due to injury, pitched in with 25 tackles on the year. Ethan Bennet led the team in sacks with five and also had 22 tackles on the season. David Hussey recorded five interceptions during the year, which also was a team high.

Many other players made key contributions throughout the year on the offensive and defensive side of the ball and especially on special teams.

Generals outgun Rebels in first round of playoffs

Toby King (10) proved to be a consistent warrior for the Lowndes Academy Rebels this season, according to head football... read more