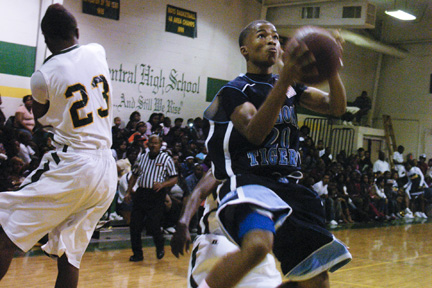 Calhoun's Jamine Jordan (20) goes up in a hard fought season opener the Tigers dropped to the Central Lions Saturday night 84-75.

The game was the season opener for both schools, and fans line up outside the Central High gymnasium beginning at 2 p.m. They stayed through junior varsity and girls contests to have a seat for the main event.

For most of the game, the Lions and Tigers were in a tight battle. Central led 24-15 at the end of the first quarter.

But after the Tigers knotted things up at 35 all, the Lions pulled ahead 38-36 at the half.
Central led 56-50 at the end of the third quarter.

But when senior standout Wendell Snow shifted into slam-dunk mode, the Lions blew the game open to win 84-75.

He said Saturday night’s contest was played in a good atmosphere.

As to the performance of his Lions, Baker said, “You know my guys are young. I’ve got about four seniors… We try to play up and down style. It’s fun for the fans. It’s fun for my players… everybody gets to play.”

“He said his leading scorer, “Number 50 (senior Wendell Snow) is an all-state player. And I’m not expecting anything else from him but to be that. He an 18-18 guy every night (18 points, 18 rebounds). I can always depend on him around the basket to block shots… change shots up.”

Baker also included in a solid group to get the job done, Perry Rudolph, J.C. Doss, and Michael Rush.
Leading scorers for the Lions were Rafael Mickle with 11, Perry Rudolph with 16, Marcus Mitchell with 7, Snow with 18 and J.C. Doss with 14 points.

Calhoun head basketball coach Jim Hunter said, “Jalen Mason stood out the most” for his team. “We just never did get into sync on the thing that we was trying to do. We had it in spurts, and when in spurts with it we tied the game up or came back to pull within two. But we just never did play out style of ball tonight.”

Jalen Mason led the Calhoun varsity in scoring with 28 points against Central.

The Calhoun junior varsity won the opening contest of the night 39-29. Jakeem Davison had 14 points for Calhoun. Rashard Marshall and Markarius Watson had 6 each for the Lions.

Parent challenges Board of Education to improve school system

By Fred Guarino The Lowndes Signal The Lowndes County Board of Education elected its officers, received news of a grant... read more