Generals outgun Rebels in first round of playoffs 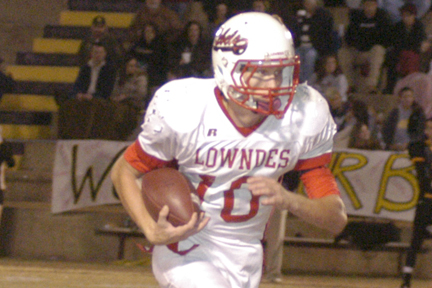 Toby King (10) proved to be a consistent warrior for the Lowndes Academy Rebels this season, according to head football coach Art Sullivan. Though the Rebels failed to score on the drive, King had one kickoff return of 58 yards.

The outmanned Lowndes Academy Rebels took their final curtain call of the 2011 season Friday night losing out in the first round of the Alabama Independent School Association (AISA) 1A state playoffs to the Autauga Academy Generals 41-9 in Autaugaville.

“We just didn’t have any lineman,” said Lowndes Academy head football coach Art Sullivan of his shorthanded team. Hampered by a host of injuries, the Rebels had only 15 players available for action Friday night.

However, Sullivan said his squad included a lot of young guys who will be coming back and who, he said, will “get better next year.”

Looking to the future, he said, “Some of our young guys, like our ninth graders — We had a real good junior high year — We only lost one game… So, if they work in the weight room and get strong and everything, we ought to be alright next year.”

In the final analysis he said his team just didn’t have the linemen or the size and needed maturity.

The visiting Rebels’ only points came on a safety caused by John Blackmon at the 1:57 mark of the third quarter and a 14-yard keeper by McIntosh with extra point by Cody Harrell at the 4:39 mark of the final period to make the 41-9 final score.

The Generals drew first blood on a 21-yard pass play from Stu Dawson to O.J. Howard and extra point by Pateell Smith at the 9:47 mark of the first quarter and never looked back.

It was 34-0 Generals at the half. And their final points of the night came on 12-yard run by Reggie Browder and extra point by Pateell to make if 41-0 at the 7:51 mark of the third quarter.

On the night for the Rebels, King caught five passes for 26 yards and rushed six times for 18 yards. He also notched a 58-yard kickoff return.

The Lowndes Academy Rebels fell to Autauga Academy at home Friday night 53-14. The loss leaves the Rebels 4-2 in... read more