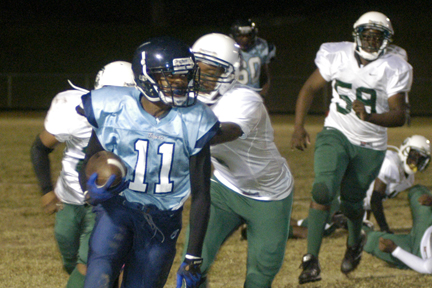 Calhoun's Jamarcus Davison (11) goes on the run for the victorious Tigers Friday night.

Central High School played with a Lion’s heart on the road all season to finish 0-10 and falling to their archrival Calhoun Tigers 20-8 in Letohatchee Friday night.

The win was the second for Bill Williamson’s 2-10 Tigers, but this contest was much closer than the score.

As Central’s field house, which was destroyed by fire, was not completed for use this season, the 2A Region 4 Lions had to play all 10 of their games on the road.

Central head football coach Keith Scissum said of his squad, “I think they held up pretty good. We had a lot of points to where we played a couple of games sluggish having to go so far every week… But sometimes we came out and played pretty good like when we played Francis Marion and one or two more games we played pretty good.”

He noted to play this season of his young guys, his front five, his defense, his line and Terrarias Saffold and Keith McNeil.

In addition to having to play on the road, this entire season was dedicated to the memory of Central’s Deundre Rudolph, age 16, who was tragically killed in a one-vehicle accident on the first day of school.

Following the contest, Williamson paid tribute to Central when he said, “I thought we were lucky to win. They got after us. My hat’s off to Central. They fight and fight and fight. They’re going to win a game real soon.”

However, Williamson said, “I’m proud of our guys for winning.”

Williamson recognized the play of Jamine Jordan for his 60-yard punt return for the first score of the night, and Jamichael Jackson for his defense.

He said of Jackson, “He’s played defense all year long and got no credit for it.”

He also recognized Quinton Green for his defensive play, and Trevontae Hardy for a 4-yard touchdown run.

The rest of the Tigers points came on a 2-point play by Devel Goldsmith and a fumble recovery for a touchdown by Jordan as the clock ran out to make it a 20-8 victory.

After a scoreless first quarter, the Tigers scored on a 60-yard punt return at the 10:06 mark of the second quarter and 2-point conversion.

Central got on the board in the third quarter when the Tigers were called for intentional grounding and a safety to make it an 8-2 contest.

Following the safety, the Tigers’ free kick was returned by Central’s Timothy Williams to the Calhoun 10-yard line. Saffold later took it in from 5-yards out to make an 8-8 contest at the 11:53 mark of the fourth quarter.

The Tigers scored again on Hardy’s 4-yard run at the 4:50 mark of the contest to put the home team up 14-8. And Jordan added the icing with a fumble recovery for a score as the final seconds ticked off the clock.

Mayor Fletcher Fountain of Fort Deposit announced Friday morning that he has called a special meeting of town council for... read more