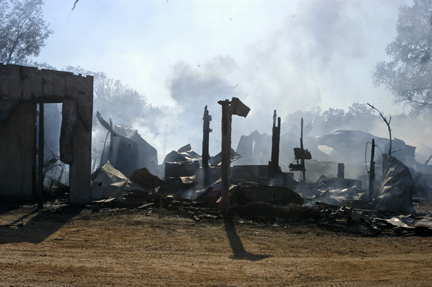 The aftermath of a Tuesday afternoon fire that destroyed three quail houses at Harrell and Sons Farms in Hayneville. Both Hayneville and Burkville Fire Departments received praise from owner Richard Harrell for their efforts to prevent the loss of other buildings, birds and equipment.

A Tuesday afternoon fire destroyed three quail houses and about 20,000 birds at Harrell and Sons Farms in Hayneville.

Richard Harrell, owner, said that the Hayneville and Burkville Fire Departments did a good job of containing the fire.

“”They did an extremely good job,” he said. “They saved a lot of things that could have made it a lot worse.”

Harrell said there was farm equipment in sheds and incubators and hatchers in the other buildings, as well as pheasant and quail that were saved. He said the farm also includes cattle.

Lamar Hall, chief of the Burkville Volunteer Fire Department, said his crew received a call at 1:57 p.m. and responded to the blaze by 2:14 p.m. to assist Hayneville. He said his crew brought their tanker truck and five firemen.

Hall said the cooperative work between both Burkville and Hayneville is always good and said he had nothing but “high praise” for all the firefighters in the county.

“Well, they responded well as two fire departments that support one another. We always work together good, and all went well,” said Jesse McCall, fire chief for Hayneville. “Together, we did a superb job. When we were arriving, it was already engulfed.”

When asked what happened, Harrell said, “I don’t know. This is one of few days we were off working in another place, and it started while we were gone, nobody was here.”

Harrell said his brother, David Harrell, found the fire, and by the time he and others arrived, “it was gone.”

Harrell said he thought the fire started about 2 p.m. but didn’t know what caused it.

“Nobody was at the farm for about six or seven hours, which is rare,” he said.

He said the three houses that burned were grower houses for quail and that his brother, who was first on the scene, prevented another houses containing birds from burning.

The Lowndes County Board of Education recognized quarterly award winners at Thursday night's regular meeting. From left, standing at back,... read more