Lowndes holds on against Chambers 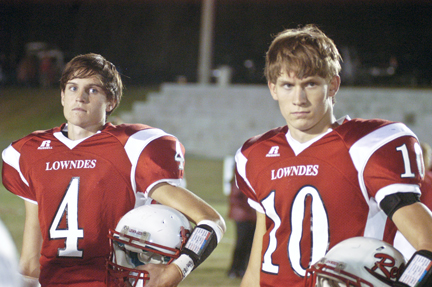 “I thought our defense matured a little bit,” said Lowndes Academy head football coach Art Sullivan. “We didn’t start out real good, but as the game went on our defense got better. So that’s probably the best defensive game we’ve played.”

He said, “The two goal line stands (by his Rebels)… they were big… that sort of game them a little confidence, and, you know, got them going a little bit.”

Sullivan said Toby King, Garrett Headley, Garrett Nall and quarterback Hank McIntosh all had a good game. But he said, “It’s just a team win. We’re glad to get a win finally.”

King had 14 carries for 71 yards and a 4-yard touchdown run. He had also seven pass receptions for 53 yards.

Headley had three pass receptions for 35 yards and returned a fumble recovery 75 yards for a touchdown.

King got the Rebels on the board early with a 4-yard touchdown run at the 9:58 mark of the first quarter. Cody Harrell, who was two for two in point after kicks for the night, made it a 7-0 lead.

But the visiting Rebels’ Steele Jackson scored on a 7-yard run at the 6:06 mark of the first quarter.

And Tyler Slay added the point after kick to make a 7-7 contest.

The home standing Rebels would go up on top to stay when Headley picked up a Chamber Academy fumble and returned it 75-yards for the score with 19:3 seconds left in the first quarter.

But once again the home standing Rebels’ defense rose up to stop a 2-point try for the lead.

Lowndes Academy travels to play Crenshaw in the last region tilt of the season this coming Friday night.

The Calhoun Tigers took a step backward Friday night in falling to Samson 28-12 on the road, according to head... read more