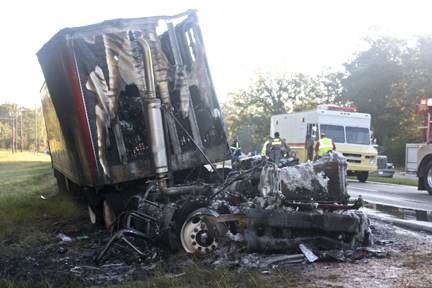 The Westbound lane of U.S. 80 at County Road 37 was expected to be closed until about 5 p.m. or 6 p.m. Friday as the result of a two-vehicle accident with injuries and a third vehicle being damaged, according to Lowndes County Emergency Management Agency (EMA) Director Walter Hill.

According to State Troopers, the crash occurred just before 6 a.m. on Highway 80 West and involved a Coca-Cola truck, a pickup and one other vehicle.

Troopers reported the driver of the Coca-Cola truck and one other driver were injured and that traffic was backed up during cleanup from Coke truck.

Hill said a Coca-Cola freight liner involved in the accident “exploded and one of its fuel tanks disengaged from the tanker and spilled approximately 75 gallons onto the main highway of U.S. 80.” He said the truck compartment completed burned up and portions the freight liner were destroyed.

Hill said the driver of a small pick-up truck “was ejected upon impact and was taken to the hospital in serious condition.”

He said the explosion damaged a third vehicle.

Hill said the accident is being investigated by the Alabama State Troopers. He said Burkeville Fire and Rescue responded immediately to the scene and provided immediate medical attention to the injured until medics arrived.

He said Catoma Fire and Rescue personnel also assisted at the scene along with the Lowndes County Sheriff John Williams and Deputy Al Cox, himself and members from Hayneville Fire Department.