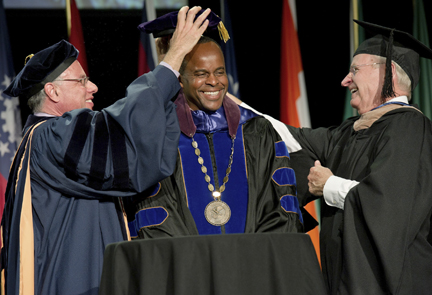 MACOMB, IL — “Today, we observe the inauguration and founding of Western Illinois University. It is a day of celebration, a day of hope, and a day where we observe the past, the present and the future.”

Those are the words of new invested Western Illinois University President Jack Thomas of Lowndes County, as he addressed members of the board of trustees, faculty, staff, students, alumni, the University community and others at the 2011 Founders’ Day/Inaugural Celebration held Sept. 23 on the WIU-Macomb campus.

Thomas was invested as Western Illinois University’s 11th president during the annual Founders’ Day celebration. He was named president in January 2011 and began his duties July 1.

“I especially want to thank my wife, Linda, and our sons, Patrick and Darius I am very excited that my father is here today, Mr. Clinton Thomas Sr., and my sister, the Honorable Mayor Helenor Thomas Bell (of Hayneville) and all of my other family members and friends who have traveled a great distance to be here today,” said Thomas.

“This is a very humbling experience, and I am honored to have been chosen as the 11th president of Western Illinois University,” he said.

By Fred Guarino The Lowndes Signal Lowndes County is the subject of a national demonstration project on dealing with the... read more