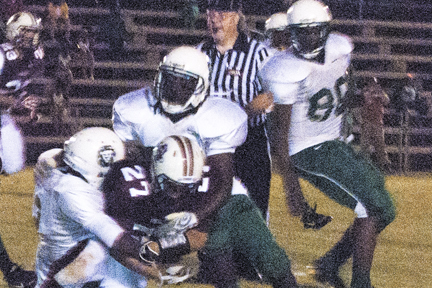 By Justin Averette
The Clanton Advertiser

The Thorsby Rebels got all they wanted from Central-Hayneville but came out with a two-touchdown victory, 56-42.

The game was tied as late as 5:48 to go in the game but short touchdown runs by Nathan Oldroyd put the game away.

Thorsby was in control early, but two costly second half fumbles inside Lions’ territory — one on the 2-yard line — allowed Central-Hayneville to battle back into contention.

Thorsby scored first with a 1-yard run by quarterback Braden McRae, set up by a 28-run run by McRae and a 12-yard pass from McRae to Oldroyd.

Central-Hayneville, who went into the game with the state’s longest losing streak at 37 games, struck back quickly, as Timothy Williams returned the ensuing kickoff 75 yards for a TD. A successful 2-point conversion gave the Lions their only lead of the night at 8-7.

Matt Morgan was sensational catching the ball Friday night and scored Thorsby’s next two touchdowns. McRae would find Oldroyd with 10:55 to go before the break to put things at 28-8.

A 1-yard touchdown run on 4th and Goal by Oldroyd with 10.2 seconds left before halftime would prove to be one of the game’s biggest plays. The score was 35-14 at halftime.

The Lions would battle back, aided by Thorsby’s two fumbles, to tie the score at 42-42.

Kip Cleckley’s onside kick recovery after Thorsby went up 48-42 gave the Rebels some breathing room. Oldroyd’s final TD with 1:31 to go put the game away.