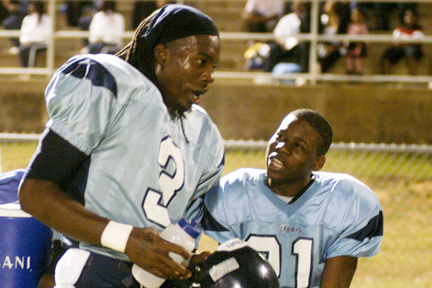 Keldrick Exford (3) who scored the first touchdown of the night for Calhoun on the way to a 28-18 homecoming victory chats with (21) Quanicholas Taylor.

The Calhoun Tigers notched their first victory of the season in front of a homecoming crowd in Letohatchee Friday night by defeating the New Brockton Gamecocks 28-18.

“This was the fourth game in a row that we’ve had a chance to win. I’m so proud of them. They deserved to win,” said a happy Calhoun head football coach Bill Williamson.

“We deserved it. We’ve lost enough,” said Williamson. But he acknowledged, “we got some breaks go our way tonight.”

The Gamecocks attempted four onsides kicks, all of which were recovered by Calhoun. And the Tigers scored twice on interceptions.

New Brockton opened the contest with trickeration, trying an onsides kick on the kick off.

But the Tigers drew first blood when on a fourth-and-goal at the Tiger 6, Keldrick Exford picked off a Gamecock pass and returned all the way it for a touchdown. Quarterback Jamine Jordan took it in for the 2-point conversion to put the home team up 8-0 at the 3:23 mark of the first quarter.

The Gamecocks finally got on the board with 2:51 left in the half to make it an 8-6 ballgame when Chris Green hit Jarrell Thomas on a 25-yard pass play.

The Tigers responded in the third quarter, however, when on a fourth-and-inches play, Jamarcus Davison got past the line and scampered 61 yards for a score. This time the 2-point try failed, but Calhoun led 14-6 at the 8:03 mark of the third quarter.

The Gamecocks made the home crowd nervous when Kendal Truitt scored from 6-yard out to make it 14-12 contest at the 8:02 mark of the fourth quarter.

But Davison would get loose for Calhoun again and score on a 12-yard run at the 4:21 mark of the final stanza. Jordan would take the 2-point honors and the Tigers led 22-12.

New Brockton was determined to stay in the fight and scored on 8-yard pass play to Johnny Silas to make it a 22-18 contest with 2:14 left in the game.

But the game would conclude happily this time for the Tigers when Jalen Mason picked off a desperation Gamecock pass and returned it for a score to make it 28-18 as the final horn sounded.

Calhoun next travels to Samson.

Central-Hayneville defenders tackle Thorsby running back Carlos Campos. By Justin Averette The Clanton Advertiser The Thorsby Rebels got all they... read more