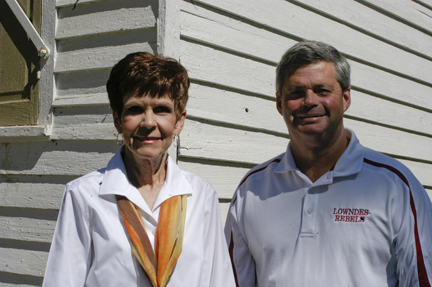 Linda Williams and Stewart (Sandy) Harrell both of Lowndes Academy were inducted into the Alabama Independent School Association Hall of Fame at the Embassy Sites in Montgomery Monday night. Williams has taught English for 35 years (25 years at Lowndes Academy) and Harrell has been a volunteer coach at Lowndes Academy for 30 years. He was also a member of the Lowndes Academy board of trustees for 18 years and is serving in his seventh year as an AISA board of directors member.

A Lowndes Academy English teacher and a Lowndes Academy volunteer football coach and former board of trustees member are among the latest inductees into the Alabama Independent School Association (AISA) Hall of Fame Class of 2011.

Monday night, Linda Williams and Stewart (Sandy) Harrell, who currently serves on the AISA board of directors, were among 12 inductees at dinner and ceremony for the AISA at the Embassy Suites in Montgomery.

According to the AISA, “The inductees have spent a large portion of their lives supporting the institutions that have made up the Alabama Independent School Association during its 40 yeas of existence.”

Williams, who makes her home in Lowndesboro has been teaching English, “everybody’s favorite subject,” she jokes for 35 years, beginning with Fort Deposit Academy in the 1970’s.

She said came to Lowndes Academy in 1986, where she still teaches.

“It really caught me by surprise,” said Williams of the news she would be inducted. “I had never dreamed that anything like that would happen. I just feel so honored because they are (those inducted) such a great group of hard workers.”

“And I was just doing what I normally would do, and all of sudden there is this great honor, and I feel very flattered,” Williams said.

Williams said she’s thought about it, “If I had to do it over, would I do it over the same way?”

Her answer: “Yeah. Times are quite different now, and the kids are different.” But she said, “I would do the same thing. It’s just a very rewarding career. The money is not good, but the rewards are good.”

When asked the biggest change she’s seen, Williams said, “I say motivation. Kids today have so much out that that’s more fun than school. There are so many things that interfere. But the good ones just keep plugging along.”

Harrell of Hayneville, a volunteer coach and board of trustees member at Lowndes Academy, started school in the second grade there and graduated there.

The owner of the Hayneville BP and a 1981 graduate of the Massey-Draughon Business School in Montgomery, returned to Lowndes Academy, which his father, R. V. Harrell helped start, to work as a volunteer football coach for 30 years.

He is currently helping his son coach the junior high football team at Lowndes Academy.

Harrell is being inducted for his volunteer coaching as well as his serving on the board of trustees for Lowndes Academy for 18 years and the AISA board for seven years.

“The biggest change is the economics of the present day and the struggles of the private schools (to continue to exist),” said Harrell. “But there has always been a need.”

He said, “It’s been a honor being selected with Miss Linda.”